Recently, it seems that we’ve been getting  a number of forbidden romance dramas to review. Back in December, we covered Queen of Hearts, a film about an older woman developing a sexual relationship with her stepson. Then, just last month we had Before the Dawn where a high school teacher becomes involved with her troubled student. Both films tackled some challenging topics while dealing with the discomfort of taboo subjects. Today, we have another film that fits this recent trend but, perhaps, more boldly and emotionally than the two aforementioned titles. Writer/director Mark Lewis’s newest film, Enthusiastic Sinners, is a sometimes erotic and sometimes heartwarming tale about two people who find each other by chance and have their lives change overnight.

The film opens with married police officer Bruce Durant (Christopher Heard) responding to a call about gunshots being fired near his location. Upon arrival, a widow named Shelby (Maggie Alexander) reveals that her son had been hitting bullets with a hammer and setting them off. Frustrated, Shelby drops some personal information and, soon after, the two are overcome with lust. They have sex and later agree to spend the day together. From here, Bruce and Shelby talk openly and honestly about their respective lives while engaging in more sexual acts along the way. All the while, their physical relationship evolves into an emotional journey over the course of a 24 hour period.

Enthusiastic Sinners is not your typical romance. It’s realistic and raw and, for some viewers, it will certainly be too much. The tagline for the film reads, “their lust story became a love story,” and there’s no better way to put it. There’s a lot of nudity, both male and female, and some pretty graphic sex scenes when compared to your typical Hollywood fare. Basically, if sex makes you uncomfortable, you’d do well to stay far away from this film. For these scenes, it toes the line of being pornographic without ever fully getting to that point. Again, this will be shocking for some viewers but, if you stick with it, you’ll discover there’s much more to this film than just sex. 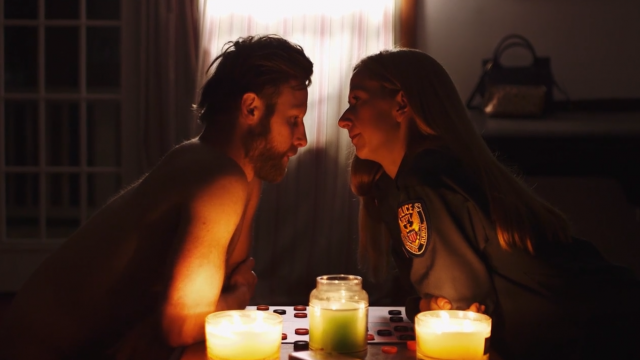 A lot of credit needs to go to writer/director Mark Lewis. He certainly takes a road less traveled in presenting this type of story to the audience. Though there’s a lot of nudity and sex, it’s always handled relatively tastefully. Initially, Bruce and Shelby just get right down to business but, as the film progresses, their bond becomes more than just physical. While the film starts off graphic, it gets less and less so as it continues. Additionally, it never feels too exploitative. Again, the film does just enough to be somewhat shocking without ever delving into full blown pornography. Lewis’s script is also loaded with tender moments and cutesy dialogue. For anyone that has ever been in a serious relationship, it’s basically a cinematic representation of the “honeymoon phase” of a relationship. The two learn the good, the bad, and the ugly about one another while never wanting to be apart. It’s in these moments where the film is at its best.

Even more praise should be heaped onto Christopher Heard and Maggie Alexander for their performances in Enthusiastic Sinners. It’s one thing for someone to write a story such as this one but it’s an even bigger testament to the talent onscreen being able to make it work for viewers. Heard’s Bruce is the more standoffish of the two and also the one with the most to lose. You’d think he’d be an unlikable character given the fact that he cheats on his wife with another woman but, strangely, you kind of feel for him. What he does is wrong but hearing his explanation will have you sympathizing with him. It’s another one of those taboo subjects that Enthusiastic Sinners isn’t afraid to turn on its head.

Then, there’s Maggie Alexander as Shelby. Just like we said about Jackie Kelly’s Sylvia in our recent review of Tennessee Gothic, Alexander is intoxicating in this role. She handles a lot of dialogue that’s clearly scripted but gives life and personality to it. As Shelby, she’s in your face and honest about her life and you can see why Bruce would be drawn to her.  Together, Heard and Alexander bounce off one another perfectly. Even though Bruce and Shelby are selfishly shirking their responsibilities as a husband and mother respectively to engage in their lustful desires, it’s one of the things that makes them human. That’s the biggest compliment we can serve the film. It’s a human story with fully fleshed out characters. This is what makes the film resonate and keeps it from being considered more along the lines of a smut film. 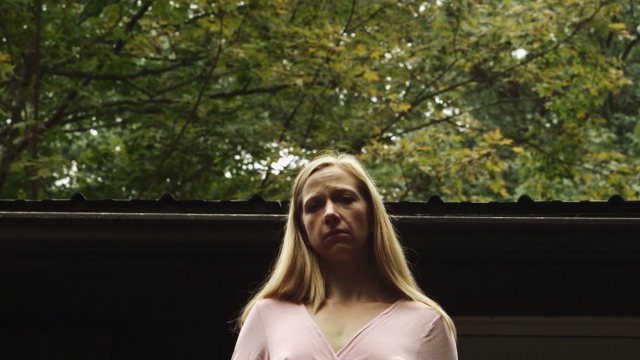 When it comes to the negatives of Enthusiastic Sinners, the main one is going to be the sex scenes. Though, it’s hard to completely consider them a negative since they do have purpose and help to establish the different phases of a relationship that the characters build. The problem with them is that they’re definitely going to limit the reach of the film in general because not everyone will be able to handle them. It’s also hard not to praise Lewis and company for this bold approach. As previously mentioned, they’re done well and don’t feel obscene in the way that some of Lars von Trier’s work often feels. Ryan Andrew Balas is responsible for both the cinematography and editing and does some great work maintaining the emotion of the film throughout every scene. The only other minor negative is that some of the dialogue can be a bit corny. However, this feels intentional with much of the playful banter. The emotionally heavy vibe of the film just tends to take precedent over some of the more lighthearted moments.

Overall, Enthusiastic Sinners is a shocking film but not in the ways you’d expect. Yes, for some, the graphic sex scenes will be shocking. For others, it’s shocking that such a bold and fearless presentation can also be so heartfelt, poignant, and impassioned. Everyone involved with the making of this film deserves recognition for helping to craft a unique version of a timeless love story. The story itself isn’t breaking new ground but the execution is. It’s too bad that Enthusiastic Sinners will probably never be universally accepted due to its content. Yet, that’s also what makes it so fresh and original. If you’re open minded when it comes to sex and nudity on film, Enthusiastic Sinners is one not to miss.

*Enthusiastic Sinners is currently available to purchase on DVD from Amazon and also available to rent or buy digitally here on iTunes. Click here to check out the trailer on YouTube.*