Thus far, Nicolas Winding Refn has been criminally underrated as a writer and director. Despite making his directorial debut in 1996 with the first installment of the Pusher trilogy, he didn’t receive mainstream success until 2011’s Drive. The Ryan Gosling-led crime drama was a surprise hit and gained Refn some notoriety. Following Drive, however, Refn disappeared from the limelight to continue his own unique brand of films; the most recent being The Neon Demon.

If you’ve never seen one of Refn’s films, they are truly unlike anything else. The pacing is slower than standard Hollywood fare with frequent use of leisurely pans, zooms, and dolly shots. Many of the techniques he uses were staples of filmmaking in the 1970’s. The music in his films is often electronic based and always demands attention. Also, his usage of color is a highlight and there aren’t many filmmakers that use it the way that he does.

Elle Fanning stars as Jesse in The Neon Demon. She is an aspiring model who seemingly everyone latches onto as soon as they meet her. While she garners attention, she befriends a makeup artist named Ruby (Jena Malone) who introduces her to two other models: Gigi (Bella Heathcote) and Sarah (Abbey Lee). From the beginning, Gigi and Sarah have it out for Jesse who they see as a threat. In the film, Ruby and amateur photographer, Dean (Karl Glusman), are Jessie’s closest confidants though they go through their own spats with each other as well. Keanu Reeves and Christina Hendricks also appear in bit roles as a motel owner and modeling agent respectively. Reeves specifically gives a performance unlike anything he has been known for.

It should be known that the plot for The Neon Demon is quite loose. The film is much more about spectacle than it is the story progressing onscreen. There is a story but it’s all about jealousy and the relationships between characters. All of their interactions with one another are tense and awkward. Their words are brimming with spite and contempt. Essentially, the plot is just as superficial as the modeling industry portrayed within the film. 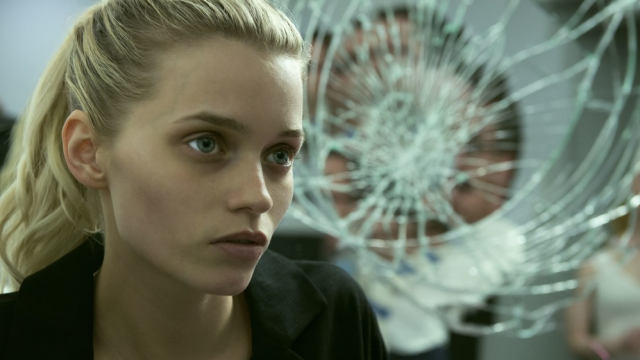 Fanning’s turn as Jesse is quite different than anything she has ever done before. Where Fanning has been cast frequently as innocent characters in the past, she takes on a much more mature role in this film. While her character is only 16, she is just as manipulative and conceded about her self image as the other models. Refn did a fantastic job in casting Fanning as she has a unique look that allows her to stand out from the other actresses. Similarly, this is exactly what he was going for in the story’s plot as well. Basically, it’s a case of art emulating real life.

Where The Neon Demon truly shines is in its cinematography and its music. From the opening shot of the movie, viewers are treated to breathtaking visuals and an amazing soundtrack. Every frame is a work of art in itself and it’s impossible to look away. If Stanley Kubrick were alive today, this is the type of film he would be making. Films like this are the reason that people consider filmmaking an art form.

Refn’s usage of color in the majority of scenes is simply gorgeous and intriguing to the eye. Previously, he used many of the same tactics in his last film, Only God Forgives. Everything from the girls’ makeup and outfits to the lighting commands attention and every scene has multiple things to look at. There are several dream-like sequences in which Refn lets loose and seems to leave the real, tangible world of his film. While these scenes don’t necessarily contribute to the story, they also don’t take the focus away from it either.

As beautiful of a film that The Neon Demon certainly is, it isn’t perfect. While the plot and acting are convincing, it seems to drag on just a tad too long. Without ruining the ending, it feels as if it could’ve been cut off about 15 minutes sooner to be a much more concise movie. There’s nothing overly significant in the few final scenes other than some moments that are shocking for the sake of being shocking. They’re a bit hokey and take away from the other things that had been done so well up to that point.

While it’s not as commercially accessible as Drive, The Neon Demon has a very simple idea behind it. The tagline of the film is, “beauty isn’t everything; it’s the only thing.” This is a film of aesthetics in both style and character. With The Neon Demon, Nicolas Winding Refn has crafted a visual and auditory masterpiece about a superficial world. It suffers from a few minor flaws but ultimately excels as an impressive work of art by an ascendant filmmaker.