With horror films, most of the time you’re never sure what you’re going to get. What start out as interesting ideas often backfire due to poor execution. Occasionally, an idea breaks through and leads to a successful series. Such is the case with The Purge and its newest installment, Election Year.

Over the past few years, The Purge has been one of the most consistent horror franchises around. The premise of the series is unique, the writing has been solid, and the characters are generally likable. Perhaps the biggest problem with The Purge: Election Year, though, is that it’s too consistent for its own good.

The story revolves around Senator Charlie Roan (Elizabeth Mitchell), a Purge survivor. Charlie’s presidential campaign gains steam as she vows to end the annual event. Her competition comes from a minister who acts as a puppet for the wealthy who benefit from the Purge. Charlie is guarded by Leo Barnes (Frank Grillo), the main character in The Purge: Anarchy. Following an assassination attempt, Leo and Charlie escape to the streets of Washington D.C.

Eventually, they run into a deli owner named Joe Dixon (Mykelti Williamson), his soon-to-be business partner, Marcos (Joseph Julian Soria), and a known Purge participant named Laney (Betty Gabriel). They all unite to keep Charlie alive in an attempt to end Purge Night once and for all. 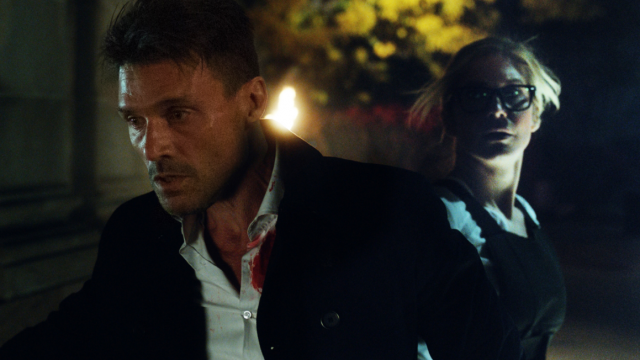 If this at all sounds familiar, it should. Take away the Charlie character and you essentially have the same film as Anarchy. Once again, Leo takes responsibility for a group of people as they navigate through the city streets. Frequently, they find safety only to have it snatched away somehow. Of course, there are various factions ready to murder any innocent bystanders that may wander into their path.

All of the things that were done well in the previous films are back in this one. For the most part, the characters are solid and it’s easy to sympathize with them. Frank Grillo is tough as nails in his second go-round in the series. Edwin Hodge is back once again as Dante Bishop. Since the events of Anarchy, Bishop has taken over the resistance to The Purge from Carmelo and plays a part in Charlie’s protection.

Of course, what would Election Year be if it didn’t have psychotic mask-wearing murderers? They’re back as well with a new trend called “murder tourism.” People from other countries fly in to the United States to participate alongside the usual Purgers. While the casual citizens cleansing themselves aren’t the main villains in the film, they are relatively memorable. Particularly, there’s a young girl who, after already murdering her parents, attempts to break into Joe’s deli for a candy bar. While this is a bit far fetched, it does show the lengths that some people will go to satisfy their thirst for blood. 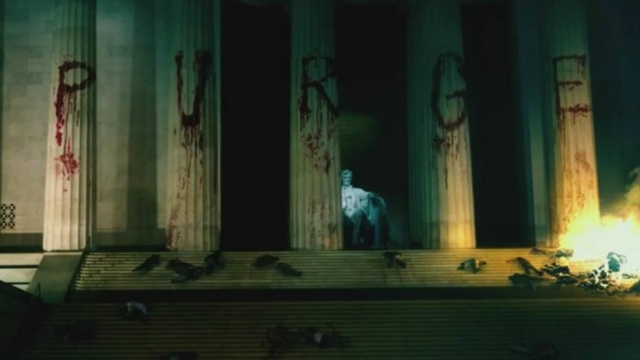 Where Election Year tends to falter is in its purpose. With each of the previous two films, the stakes have been raised. Viewers learn why The Purge continues to exist and, by eliminating the poor, the upper crust of society remains powerful. Election Year should’ve expanded on this idea more to make losing the event seem like a serious threat to these people. Instead, it’s just kind of stated that there are people that don’t want to lose The Purge. As a viewer, you don’t feel a real sense of agency from any character in particular. Instead of being a heroine, Charlie instead seems like the minister in that she’s a puppet for the opposition. For a film series that has escalated the overall plot in each entry, Election Year doesn’t seem to have any more importance than Anarchy.

While The Purge: Election Year isn’t a bad film, it just doesn’t do enough to warrant existence. It doesn’t demand much attention and is basically only there to entertain. Election Year had a chance to go deep into the politics of The Purge but instead gave viewers more of the same. Will there be another installment after this one? Unfortunately, there probably will be. It’s just too bad that writer/director James DeMonaco didn’t go all in on Election Year as a bombastic finale. While The Purge films remain consistent with Election Year, it’s going to be hard to get excited for what the future holds for this series.