With all of the great television dramas out there, it’s easy to forget that comedies used to dominate the small screen. From shows like The Brady Bunch and Gilligan’s Island all the way to Friends, comedies had been all the rage. After the premiere of HBO’s The Sopranos, television took a serious turn. The attention was turned to realistic crime dramas instead of the buddy comedies of the past. However, there is one show that maintains the heart of a sitcom with the drama of modern television: Orange is the New Black.

Season 4 of the popular Netflix show premiered on June 17th. The beauty of modern on-demand programming is the ability to binge watch entire seasons instead of waiting a week between episodes. Of course, if you’ve read this far, it can be assumed that you’ve done just that. With Orange is the New Black, it’s not hard to power through it in a short time. It’s seriously that entertaining. Though, Season 4 definitely had its share of drama and turmoil.

Based on the memoirs of Piper Kerman, the general plot revolves around Piper Chapman (Taylor Schilling). Piper is thrown into a minimum security women’s prison for transferring money for a drug smuggler. From there, the series introduces numerous inmates all with their own personalities and backstories. In Season 4, Piper is well established at Litchfield Penitentiary after her bouts with other inmates and the inception of her prison panty business, Felonious Spunk. However, with an influx of new inmates, Piper butts heads with Maria Ruiz (Jessica Pimentel) over the panty empire. 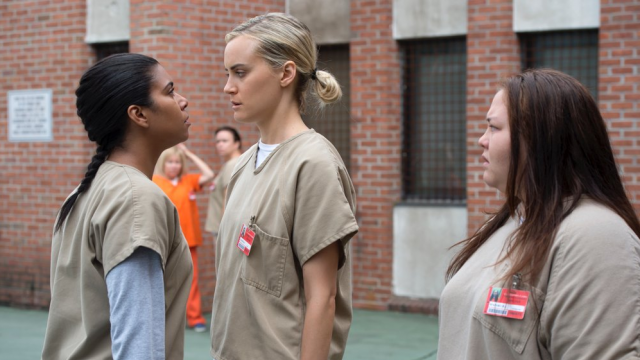 Meanwhile, Alex Vause (Laura Prepon) deals with the after effects of her and Lolly (Lori Petty) murdering a prison guard sent to kill her. Poussey (Samira Wiley) and Soso (Kimiko Glenn) spark up a romance after the latter’s suicide attempt in Season 3. Also, the Martha Stewart-esque character, Judy King (Blair Brown) is introduced as a celebrity within Litchfield. Of course, there are far too many characters to cover all of the on-goings in Orange is the New Black.

The overarching storyline of the season is the prison’s function in general. The guards who walked out on Warden Joe Caputo (Nick Sandow) in Season 3 are quickly replaced. The replacement guards run roughshod over the inmates with threats, harsh punishment, and other scare-tactics. They are led by Correctional Officer Piscatella (Brad William Henke) who often undermines Caputo. The majority of the inmates have run-ins of their own with the guards and, by the end of the season, begin to stand their ground.

This season was definitely something different for Orange is the New Black. Previously, the show relied on mostly comedy and interesting characters to hook viewers. There has always been a bit of drama but not like Season 4. This is the most grim season of the show to date and it’s not even close. From Piper getting branded with a swastika, the treatment of Sophia (Laverne Cox), the sad history of Lolly, Nicky’s (Natasha Lyonne) ongoing drug issues, and the tragic death of Poussey, there is a lot to be bummed about in this season. 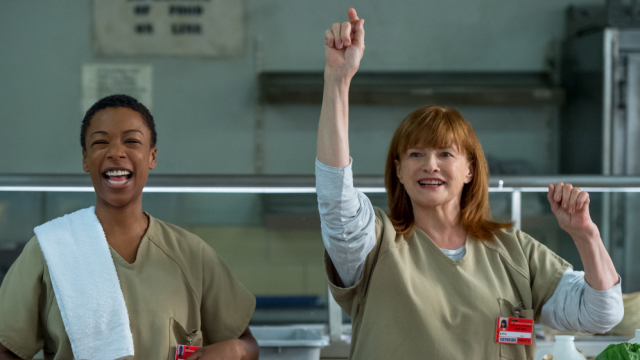 As always, there is also a lot of heart in the show too. The humorous banter and subplots remain. There are some strong relationships formed between characters and when all of the inmates finally unite at the end of the season, it’s a powerful sight. The inmates’ final show of solidarity against the guards is such a compelling climax to the ongoing story. They climb onto the cafeteria tables and refuse to come down and, in that moment, none of the issues they have with one another matter. All of the racial tensions that persist within the prison evaporate for a common goal. It may be the most potent moment that the show has offered in general thus far.

Going forward, the future looks extremely bright for Orange is the New Black, if not somewhat bleak. With the death of a very likable character, the stakes have been raised. Although the women are all inmates of the prison, they still remain people. While this is something that Caputo tries to convey to his superiors, it continues to fall on deaf ears. It will be interesting to see how the situation is handled in Season 5 especially with the cliffhanger ending of Daya (Dascha Polanco) aiming a gun at one of the crooked COs.

What’s known so far is that there will be at least be three more seasons in the series. It’s not hard to imagine that, somehow, cooler heads will prevail and tragedy will be averted. Caputo is one of the most important non-inmates in the show and you know that he truly cares about the women. He could possibly be the one to ease the situation. Regardless, you can certainly expect change at Litchfield in Season 5 and beyond. No matter what happens, Orange is the New Black continues to show why it’s the most watched original series on Netflix. If Season 5 is anything like its predecessor, it should be a season you don’t want to miss.