We live in a day and age where everyone and everything is constantly under the microscope. Gauging public response towards insensitivity in regards to sex, race, religion, etc. is always a challenge. Frankly, people tend to take things way too seriously nowadays. This is especially true in media such as film, television, video games, and the printed word. Yes, there are horrific real life events that take place on a daily basis in the world and certain things should be taken seriously. However, when it comes to something like film, people need to remember that filmmaking is a collaborative effort. People from all walks of life come together to bring a finished product to the screen. This is definitely something that viewers will want to keep in mind for Linus de Paoli’s engaging, yet controversial, sophomore feature, A Young Man with High Potential.

The film follows Piet (Adam Ild Rohweder), a socially awkward but brilliant graduate student who’s approached by a fellow student named Klara (Paulina Galazka). Klara attempts to break through Piet’s shy and insecure ways while coaxing him into collaborating on a paper for one of their classes. Soon, the two become good friends. However, the sexually inexperienced Piet misinterprets Klara’s kindness as attraction and, after a failed attempt to make a move, Klara turns him down. This leaves Piet depressed and he takes sleeping medication to help with his emotional pain. Klara tries to apologize to him before accidentally drinking some of the medication. From here, Piet sinks to despicable levels that compound and worsen as he comes to grips with his horrifying situation. From here on in, details about the plot will be kept vague to avoid spoilers.

Firstly, it should be stated that A Young Man with High Potential is most certainly not for the faint of heart. While the film is pegged as a drama/thriller, it certainly has horror elements to it. Similar to the new highest grossing R-rated film of all time, Joker, the depictions of violence and the realism of the film’s events are very unsettling at times. This film is sure to also offend victims of sexual abuse and, most likely, women in general. Though, it could be argued that the acts carried out by Adam Ild Rohweder’s Piet are circumstantial as opposed to being specifically targeted towards any one demographic. Simply put, this film’s story could be about anyone no matter their gender, beliefs, or ideals. Piet’s crimes are against humanity and not solely limited to women as some may argue. 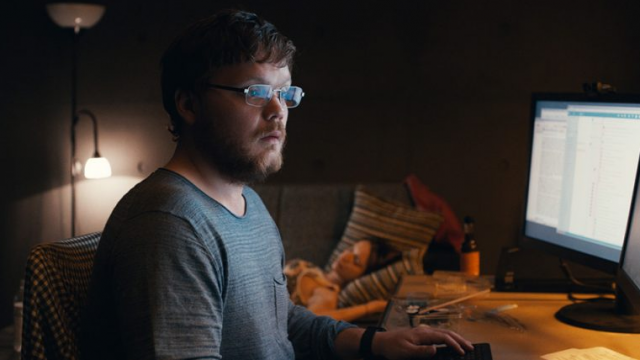 Now, with that out of the way, let’s discuss the film itself. There are only a handful of characters and every one of them has an important role to play within the story. Seemingly inconsequential characters like Piet’s friend, Alex (Pit Bukowski), and Nathalie (Vania Bajdarova), a woman who works in a cafeteria, resurface to add additional suspense to Piet’s dilemma. Veteran actress Amanda Plummer even bookends the film with her role as a private investigator. While Rohweder is A Young Man with High Potential‘s star, it’s Paulina Galazka as Klara that’s the heart and soul of the film. Galazka faces a daunting task of making both Piet and the audience fall in love with her during her allotted screentime. She fulfills her duty and displays some amazing chemistry with Rohweder. The specter of Klara constantly haunts Piet and Rohweder does an excellent job showing his mental and emotional pain while continuing with his horrific actions.

After establishing the connection between the two leads, the rest is up to Rohweder to carry the bulk of the plot. Admittedly, the plot is a little sparse overall. However, that’s actually a good thing in the case of this film. Instead of being bogged down with unnecessary dialogue or action, writer/director Linus de Paoli lets the gravity of Piet’s situation sink in as things spiral out of control. Though A Young Man with High Potential is a slow burn of a film, its runtime flies by. As a viewer, you’re left alone with Piet to experience things as he’s experiencing them. It’s kind of like a car crash in that you can’t look away no matter how bad things get. There are appalling acts carried out but the film also helps you understand things from Piet’s point of view. What he’s doing is awful but you can argue that he does them without malice and the experience isn’t inconsequential to him.

So much of this has to do with the writing and masterful direction from de Paoli. For starters, A Young Man with High Potential is a beautiful film to look at. It has a very clean and sterile feel to it that perfectly juxtaposes the heinous events that eventually occur. There are also many subtle moments or actions that are mirrored later, such as Klara making herself at home and taking whatever she wants in Piet’s dorm, that seem routine or mundane at the time. Many of them pop up again later in much more drastic circumstances. Overall, the film is extremely well crafted in every aspect and helps make it a captivating, yet distressing, experience. 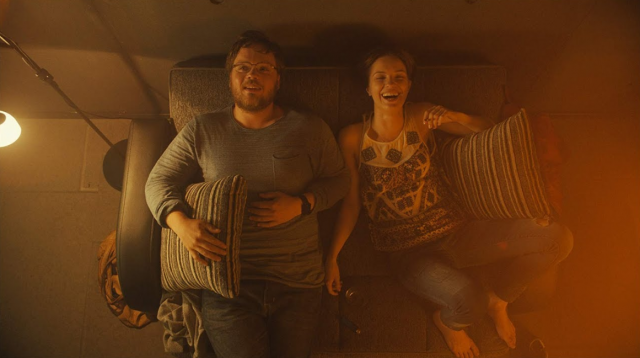 Now, let’s circle back to the shocking aspects of the film once more. Make no mistakes, A Young Man with High Potential is an absolutely gruesome film at times. Again, its realistic depictions of unthinkable atrocities isn’t going to sit well with some viewers. Yet, it doesn’t really break any new ground when it comes to shock factor, violence, and gore. Films like Cannibal Holocaust, Hostel, and Antichrist have gone above and beyond most of the things shown in this film. The difference between those titles and this one is that A Young Man with High Potential actually displays a sense of artistry and storytelling behind it. A filmmaker like Antichrist‘s Lars von Trier often aims to shock and disgust viewers with his movies. Here, Linus de Paoli actually weaves an intriguing, albeit disturbing, tale. Even though Piet is going to unspeakable lengths to cover up his crimes, you’re with him every step of the way. As a viewer, you simply have to know what happens and it makes all the difference in separating this film from the other horror schlock that’s out there.

As controversial as it may be, A Young Man with High Potential is excellent. It’s a film that makes you care about a seemingly vile character in Piet as you sympathize with what he’s going through. It’s also extremely well shot and edited which makes watching it a breeze. At just shy of an hour and a half, the film flies by and demands your attention from start to finish. As previously mentioned, this is a title that’s going to generate hate given its subject matter but it’s completely unwarranted. There’s an intriguing story being told and, if given an unbiased chance, A Young Man with High Potential may wind up leaving a long lasting impression.