Earlier this year, we reviewed a short film entitled Shadow from writer/director Nicholas Goodwin. The film boldly tackled a serious subject but came off a little too melodramatic and cliched at times. Nevertheless, Goodwin put together a solid piece of cinema with good acting and some sharp editing. The same praise can be heaped onto another of Goodwin’s shorts, Beauty Queen. With this film, the filmmaker continues his penchant for emotional stories with great performances and nice camerawork while avoiding the melodrama. Though, the film isn’t devoid of some cliches.

Beauty Queen is the story of a teenage girl named Christina (Christina Goursky). Despite wanting to be recognized for her personality and mind, Christina tries desperately to become beautiful. She dresses up and practices posing when alone in her room and also seeks the attention of some of the boys at her school. Christina also tries out for modeling gigs and has a particularly unnerving encounter with photographer Sebastian Schultz (James Jelkin) all in her attempts to feel pretty. Christina’s father, David (Timothy J. Cox), is eternally supportive and proud of his daughter. By the end of the film, David helps Christina ultimately learn something about herself.

From the plot description alone, Beauty Queen does seem a bit hamstrung by the popular cliches that beauty’s in the eye of the beholder or that true beauty is on the inside. Both of these are quite evident throughout the film’s entire runtime. Unlike Goodwin’s Shadow though, Beauty Queen handles its cliches a bit more lightly. Whereas Shadow felt more like a PSA or a preventative video on how to stay safe on a college campus, Beauty Queen feels much more natural. The message in the former film is quite heavy and Goodwin’s tackling of the subject is certainly commendable. With this film though, the storytelling is more nuanced and its message more heartfelt. 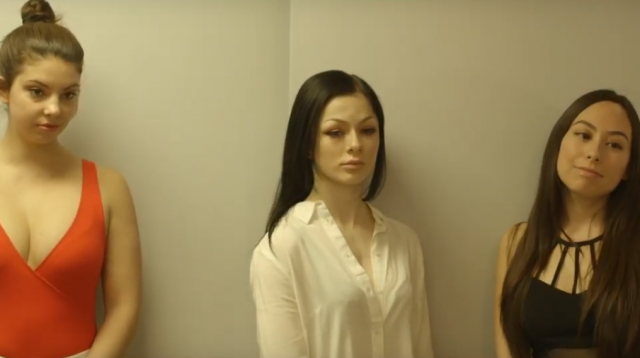 Even though Beauty Queen‘s message has been portrayed on film and television countless times, Goodwin does a good job making it feel mostly fresh here. A lot of this has to do with the aforementioned character dynamic but it’s the subtleties that really do it justice. There’s not a lot of explaining or blatant references from Christina about wanting to be beautiful. As a viewer, you can simply watch how her character acts to get a feel for who she is. Even when Christina’s trying out modeling, you get the impression that she might not really want to be where she is. She’s going through the motions and trying to be something that she thinks others want her to be. There are films like Nicolas Winding Refn’s The Neon Demon that portray modeling as a soulless and cut throat business. However, the women in that film live for that lifestyle. In Beauty Queen, you can see that it’s uncomfortable for the main character and, frankly, there’s more to being a woman than just being pretty.

In this regard, the film’s main characters do a great job of telling the story. Christina Goursky in the lead role is excellent. She’s able to convey the complexities of being a teenager as she tries to be herself while also attempting to be what she thinks others desire. Even though she’d rather be called smart than pretty, it doesn’t stop her from wanting guys to look at her as an object either. Though Goursky herself is attractive, her character’s insecurities when out of her comfort zone make her believable in this kind of role. Christina’s endearing relationship with her father immensely helps the character as well. Timothy J. Cox’s David is Christina’s go-to for support and Cox’s performance is spot on. Though the teenage years can be awkward and estranged when it comes to dealing with parents, David seems to have a firm grasp of who his daughter is. Christina may make mistakes or have lapses in judgment but David also knows that she’s smart and will be able to find her way out of any problem she faces. The emotional highlight of the film comes in the form of a one on one conversation between the two which is just great. Again, some of this is a bit unoriginal but it’s handled well and Goursky and Cox have tons of chemistry in their father-daughter relationship. 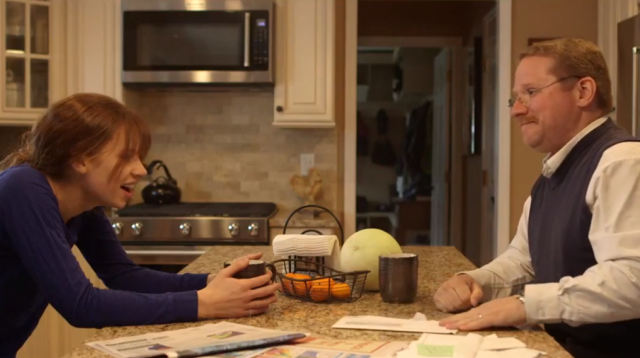 The look of the film also lends itself greatly to the telling of this story. In his previous work, Goodwin has shown an eye for dramatic shots and it’s no different here in Beauty Queen. The camera is often up close and personal with the film’s characters. This helps to show how each of them see and relate to one another. You see judgment on the faces of the other models towards Christina as well as disregard and irritation from James Jelkin’s Sebastian. Then, there’s the admiration of Cox’s David towards his daughter during the film’s heights. All of the camerawork does a great job showing instead of telling in the way the cast is shot. There are a number of emotional highs and lows and the technical aspects of Beauty Queen spotlight them very well. The lone complaint here is that the conversation between Christina and her father by the fireplace is a bit dark overall. Though, it makes sense for the scene and isn’t unwatchable by any means.

While Nicholas Goodwin’s Shadow showed off the writer/director’s potential, Beauty Queen puts his talent on display. In both films, Goodwin has been able to write some very dynamic characters brought to life onscreen by talented casts. With this film though, those characters are more natural and able to tell the film’s story through their interactions and facial expressions. The cliches aren’t completely avoided with Beauty Queen but they’re less in-your-face and, again, just more natural. Bolstered by some excellent lead performances and a relatable tale, Beauty Queen comes highly recommended.