When it comes to short filmmaking, one of the best things a filmmaker can do is leave you wanting more. In the past, we’ve covered films like Slapface and The Date which were expertly crafted works of short cinema that leave viewers intrigued by the prospect of a feature length adaptation. Critically acclaimed films like District 9, Whiplash, and The Babadook have even stemmed from effective shorts before impressing audiences as features. In the case of Don Swanson’s Occurrence at Mills Creek, the writer/director designed his short to be the introductory act of a longer film. While it does build positive hype for the upcoming full length version, it doesn’t quite meet its full potential as a standalone product.

The film focuses on a young woman named Clara (Ava Psoras) who experiences some unfortunate events in her life. It opens with Clara and her sister, Cassandra (Alexa Mechling), burying their mother, Emily (Betsy Lynn George). After dealing with the death of her mother, Clara also suffers through the death of Cassandra. Her mental state begins to deteriorate as she clashes with her estranged father, Victor (Joe Fishel), relives the events of Cassandra’s death, and struggles with her own guilt in regards to her recent tragedies.

There have been many films over the years that have centered on a character’s crippling guilt. Titles like The Machinist and Shutter Island are standouts in the mystery/thriller genre. Swanson’s Occurrence at Mills Creek takes a more cerebral horror approach and it works pretty well in the confines of this short. The film is full of discomforting imagery dealing with things like jealousy, death, and the supernatural. Despite focusing on these themes, the film feels intentionally devoid of emotion. Normally, this would seem like a negative but it actually works pretty well here. It doesn’t feel as if the audience is meant to really identify with anyone as it’s more about the experience and spectacle than emotional storytelling. 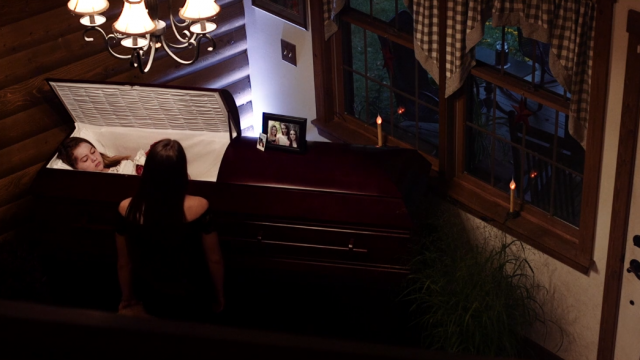 Speaking of spectacle, Occurrence at Mills Creek builds a ton of intrigue throughout its nineteen minute runtime. Swanson takes a nonlinear approach in relaying Clara’s story and it steadily builds to moments of revelation. The events of Clara’s family life and, later, Cassandra’s death, are juxtaposed with supernatural incidents which allow you to question what’s real and what’s a figment of Clara’s imagination. Admittedly, the film will probably confuse viewers on a first watch just because it jumps around so much. However, it never gets to the point where you’ll feel completely lost either. The film plays almost as a trip into someone’s nightmare and makes you want to see how far down the proverbial rabbit hole it’ll go.

When it comes to the presentation of characters, the film is a bit of a mixed bag. For the most part, everyone is convincing in their respective roles. Ava Psoras as Clara is the main focus and the film peels back layers of her character as it progresses. Betsy Lynn George makes her return to acting after a twenty year hiatus opposite her real life daughter, Psoras, as Clara’s mother. Though, it seems like she’ll probably be highlighted more in the upcoming feature instead. Alexa Mechling is convincing as Clara’s sister, Cassandra, and also handles her character’s own complexities well. Frankly, everyone does a pretty good job throughout the film. However, there’s some very stilted dialogue at points in the film that should be freshened up. Specifically, there’s a scene between Clara and her father where it just sounds like the actors are reading off of the script instead of actually acting. The dialogue is oddly specific about something viewers haven’t seen yet and it just sounds phony. Later on, we do figure out what exactly Clara is talking about but it still comes off as strange overall. 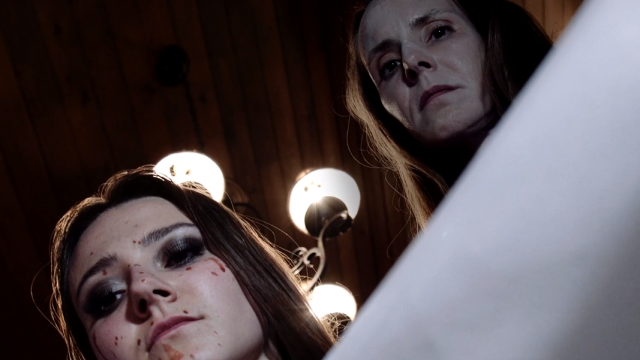 Though, the biggest issue with the short film version of Occurrence at Mills Creek is that it operates more as a teaser for what’s to come. Instead of being its own standalone entity, the short feels designed to build hype for the feature. Honestly, it does that extremely well. With all of the uncertainty and disorientation throughout the short, you genuinely want to see more of this story and these characters. Yet, as a standalone short, it works but it falls short. It’s understandable that Swanson wants to save his best for the bigger project and it’s hard to fault anyone for that. Perhaps the film would’ve been tighter if it focused more on one specific scene as opposed to trying to relay the story, jump between different timelines, and show off some of the spectacle.

It’s hard to rate Occurrence at Mills Creek as a short film. It certainly accomplishes what it sets out to do by getting viewers hyped for the feature. As a short though, it feels kind of incomplete. Again, that makes total sense given where Swanson is headed. For this short film, we’re just going to split the difference as intrigue is high but overall effectiveness leaves us a bit wanting. The final verdict for the full Occurrence at Mills Creek experience lies with the feature film set for release later this year. Regardless, Don Swanson has crafted an interesting story and world that we’re ready to get fully absorbed in.

One Thought to “Short Film Review: Occurrence at Mills Creek”