On this site, we’ve covered plenty of different types of romances from heartfelt (Babyteeth), doomed (Blue Valentine), lustful/deeply emotional (Enthusiastic Sinners), and even irreparably broken (Pieces of a Woman). To this point, though, we’ve never covered a polyamorous relationship and how people try to balance multiple partners together. While many stories of this type would often be depicted as lewd or obscene as they focus more on the “threesome” aspect, writer/director Victor Neumark takes a different approach in his debut feature. Neumark’s First Blush is a touching story about three people who find solace and comfort in their relationship that maybe they wouldn’t have in a more conventional situation.

The plot focuses on Nena (Rachel Alig) and Drew (Ryan Caraway), a married couple that gets along fine but seems to be missing some sort of spark in their relationship. During a surprise party for Nena’s thirtieth birthday, she meets a young model named Olivia (Kate Beecroft) through mutual friends, Carrie (Jordee Kopanski) and John (Christopher Moaney-Lawson). Nena and Olivia quickly hit it off and, before long, a mutual attraction begins to develop. Feeling guilty, Nena confesses to Drew who welcomes the idea of bringing Olivia into a polyamorous relationship with the two of them. The three develop a close bond but, of course, things eventually start to go awry as they try to balance their individual relationships with one another.

The main draw for First Blush is its unique story. While not the first film about polyamorous relationships (see Vicky Cristina Barcelona, Savages, Professor Marston and the Wonder Women), it paints a realistic and relatable picture of how this type of relationship could play out. While everyone’s initially in on it, characters develop different feelings and also begin to notice the flaws in their multiple significant others. The film also never becomes exploitative or overly salacious despite the relationship’s lustful beginnings. It’d be really easy to see a story like this land a hard R rating given its subject matter but, thankfully, in the case of First Blush, the story is more centered on the characters and their relationship than just sex. 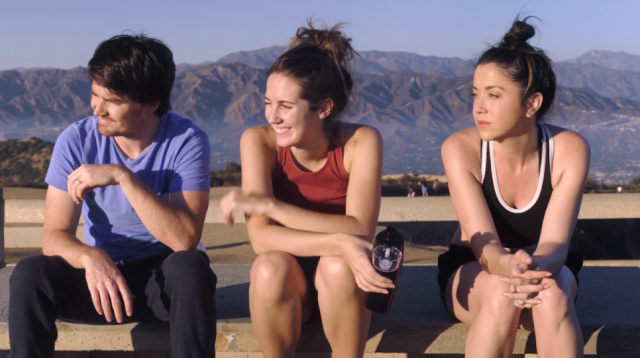 Speaking of the characters, the cast for First Blush is very good overall. The three leads, Rachel Alig, Ryan Caraway, and Kate Beecroft, have great chemistry to where you understand why their characters would be drawn to each other. Alig’s Nena is kind of the emotional core of the film as her life at age 30 feels unfulfilled and she’s a little confused. Her marriage to Drew is one of convenience and friendship as opposed to romantic love even though she truly does love him in her own way. Caraway’s performance as Drew is always laid back as he goes with the flow and aims to please whoever he’s around. Drew’s willing to go through with pretty much anything as long as everyone else is happy. Beecroft’s Olivia is a little more complex. She has a very obvious attraction to Nena. Yet, her personality more closely resembles that of Drew which soon becomes a source for conflict. From both Nena and Drew, Olivia gains a type of companionship and nurturing that she hasn’t seemed to have gotten elsewhere. However, her presence also drives a wedge into the already established relationship between her other two partners. There are a lot of interesting back and forth dynamics among the three leads but everything seems very plausible. Even Jordee Kopanski and Christopher Moaney-Lawson provide some fun and awkwardly humorous characters in Carrie and John.

Oddly enough, First Blush is a largely heartwarming experience for a good chunk of its runtime. Many films about relationships troubled or expanding relationships tend to result in heartbreak and despair. There certainly is some of that in Neumark’s film as there’s a turning point where the relationship between the three main characters begins to fracture. Yet, the interactions between Nena, Drew, and Olivia are mostly positive with each of them forming a strong bond with each other. All three are very open about their polyamorous relationship and seem happy with how things have worked out. Again, there are the darker moments of the film where things aren’t as hunky dory and the story gets a little depressing. Overall though, Neumark keeps First Blush a fun, engaging, and lighthearted affair. 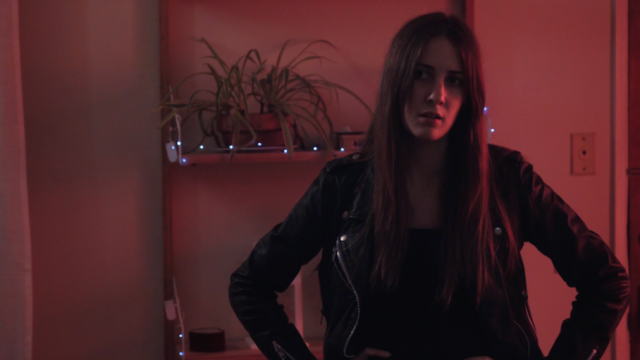 That being said, some of these darker elements do tend to get a little melodramatic. It’s hard to say exactly what the problem is here but, at times, First Blush starts to feel like a Lifetime movie with some of its later drama. It’s not particularly bad but it just seems run-of-the-mill and lacks an original flair. Nena develops confidence issues that were sort of spotlighted early in the film but not enough to really center the emotional climax around. Her worries are legitimate but they could’ve maybe played a bigger role early on than just when the film needed to have an emotional shift. The tone is also a little confused as the film tries to be a comedy, drama, and romance but never really goes all in on any genre. One other main problem is that the film is a tad too long. The ending has a curious focus on support characters while all the audience should really care about at that point are the main ones. Maybe some reorganizing of the story and its scenes could’ve helped to work out some of these kinks but, either way, Neumark almost always keeps his film playful and entertaining enough throughout.

As was previously mentioned, First Blush is a film moreso about its characters than their sexual exploits or even the drama that unfolds between them. In that regard, the film succeeds as the dynamic between Nena, Drew, and Olivia is easily its greatest triumph. Rachel Alig, Ryan Caraway, and Kate Beecroft are all very likable in their roles and each bring charisma to their respective characters. While the film does stutter along the way with some of its storytelling, writer/director Victor Neumark  present a very competently made product. Some independent romantic dramedies such as this appear sterile and uninspired but there’s certainly some depth here along with some nice shot compositions and sets. Instead of focusing on eroticism and carnal desires as other films of this ilk may have done, First Blush sets itself apart by focusing on the humanity and closeness of those in a unique relationship.

*First Blush is currently available for rent or purchase on video-on-demand platforms like Amazon, Google Play, Vudu, and YouTube. Check out the trailer below.*