It’s been over a year now since the initial outbreak of COVID-19 and the world continues to deal with the fallout. We’ve mentioned numerous times on this site how movie theaters around the country remain closed due to the ongoing pandemic and filmmakers, studios, and distributors have had to come up with new ways to release their films to the public. It probably shouldn’t be a surprise, then, that films taking place in the midst of the pandemic are starting to be released. Back in November, the indie romance/drama Love in Dangerous Times was released with bigger names like Songbird and Locked Down coming after it. With fewer options for independent filmmakers to continue on projects, it makes sense to capture the world in its current form through art. Philippe Lebraud and Pierre Glénat aim to do just that with their abbreviated version of a planned feature, Covidream.

Set during the middle of the COVID-19 pandemic, the plot of the film sees two sisters, Caroline (Caroline Lavergne) and Maëva (Maëva Rasolofoarison), meeting their father, Enoch (Pierre Glénat), at a public park. Caroline gets impatient as Maëva is late to arrive and the two still need to find Enoch. Upon finding him, Enoch is worried about his wife, Maria, an immunologist working on the COVID frontlines, who he hasn’t heard from and has seemingly disappeared without a trace. The three discuss Enoch’s predicament while dealing with the inconveniences and uncertainties of the pandemic.

The story of Covidream really focuses on how life is perceived and experienced at this exact time period. Regardless what people may think of health and safety risks or their opinion on mask wearing, there is something kind of surreal about seeing it onscreen. Watching these characters interact with one another while wearing masks and practicing social distancing with others is strange bearing witness to. Even though most people have been dealing with these things for the past year, it doesn’t make it any less bizarre to now be seeing it in cinema. The film also deals with the worries people have about contracting the disease and fearing for their family’s overall well-being. The character of Caroline takes the time to remind Enoch to observe proper pandemic etiquette while she wears her mask the least of anyone in the film. It’s a constant struggle that no one wants to deal with and the slip-ups are frequently spotlighted throughout Covidream. 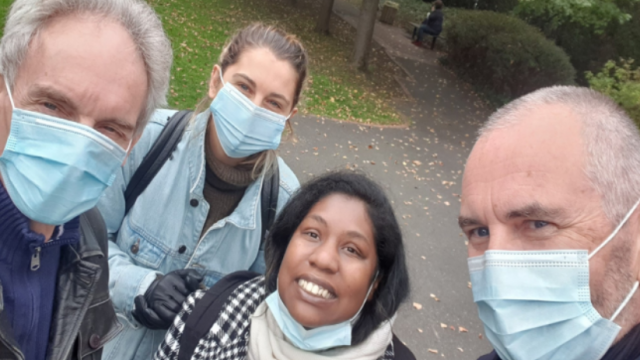 One thing that really stands out throughout the short version of Covidream is its dreamlike imagery that’s interspersed in between its story. There are plenty of images of nature with animals going about their business as if nothing devastating has happened in the world. Then there’s the more surreal aspect with masks lying around or placed strategically on certain things. It’s almost as if the film is trying to say that life will continue on as usual but there’s always that constant reminder that all of this isn’t over yet. Co-director Philippe Lebraud does a solid job relaying this message with his cinematography and editing. There’s never a point where the pandemic won’t be a nagging thought in the mind of the film’s viewers.

While there’s certainly an ambitious idea at the root of Covidream, there’s one main problem with it. It really isn’t a fully fleshed out short film experience. It almost feels like a test run for a bigger, upcoming project. The reasoning behind this is because Covidream was conceived as a feature and not just a short. Thanks to writer/co-director Pierre Glénat, we’ve been able to read the treatment for the feature length version and there’s a lot more going on behind the scenes with these characters than what viewers will be aware of in the confines of this short film. It’s sort of reminiscent of Don Swanson’s Occurrence at Mills Creek in that the short film serves as a teaser for the feature. As a concise short film, Covidream sort of misses the mark but, if the film does get made into a feature, it’ll be a lot easier for viewers to get absorbed in.

Like the aforementioned Occurrence at Mills Creek, Covidream is a difficult film to rate just because of the intention of making it into a much longer tale taking place during such a massive world event. Glénat’s feature length treatment is a much bolder take whereas viewers will probably be a little confused by the short film just because there’s not much context for the characters or the events occurring onscreen. Regardless, a feature length Covidream is what viewers will want to keep an eye out for. The short film, along with the treatment, provide a good background for what Philippe Lebraud and Pierre Glénat aim to do with their project. However, as a standalone, it may be a bit underwhelming.