It’s no secret that we’re a big fan of acting here at Cinema Smack. While good action, thrills, and laughs go a long way in providing entertainment, there’s simply no substitute when it comes to great performances. In addition, there are plenty of great performances but it’s not often where an entire film solely relies on them alone. Yet, this is precisely the case with writer/director Kosta Nikas’s debut feature film, Sacred Heart.

The film sees a young man named Robert (Kipan Rothbury) going through a personal struggle. His pregnant wife is tragically killed in a hit and run accident. Following her death, Robert, formerly a religious man, questions his faith while also throwing his own life into shambles. As he turns to drugs and alcohol, Robert is visited by the priest (David Field) who spoke at his wife’s funeral. The priest offers Robert his own outlook on the decisions made by God and, eventually, confessions of his own. The two men go back and forth with one another as hostility grows and dark secrets come to light.

From the very beginning of Sacred Heart, you notice that it’s a wonderfully shot film. The opening helicopter shot that spans over the ocean to a cemetery is certainly impressive on its own. The majority of the film, though, takes place in Robert’s house. The direction from Nikas and cinematography from Vincent Tay do an excellent job by never making the location feel stagnant. The camera angles in the house are exhausted and it never feels like you get the same shot twice. There’s always something to look at with subtle background details helping to make each location feel real. Rishi Shukla’s frantic editing during Robert’s most emotionally distraught moments depicts Robert as a proverbial mouse on a wheel. As many places there are for Robert to go, none of them are calming or give him clarity. 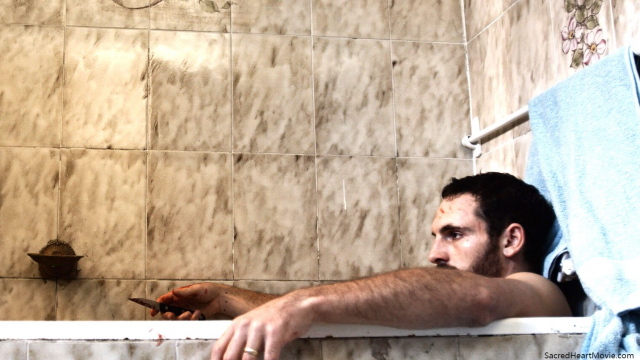 Of course, then there’s the acting. Wow. For an independent film with essentially two characters and one main location, viewers will be on the edge of their seat throughout. Both Kipan Rothbury and David Field deliver performances of a lifetime. Rothbury is absolutely stellar as Robert. He’s a man who has lost everything with nothing left to live for. Even if you’re not religious, his performance is borderline uncomfortable as he renounces his faith and lambastes the priest for retaining his.

We recently praised performances by both Adam Driver in BlacKkKlansman and Eliza Scanlen in Sharp Objects as they were able to change their characters at the drop of a hat. David Field’s priest fits into that same category for Sacred Heart. Initially, he’s sympathetic to Robert’s sacrilege. Though, as the film progresses and the tension between the priest and Robert hits a fever pitch, he becomes equally as disgraceful as Robert. As they combat each other, you hang on their every word and find it difficult to side with either one.

The bitter rivalry created between the two characters is what makes Sacred Heart a required watch. Again, there are plenty of films with great acting out there but very few that are as captivating verbally. The only film that really comes to mind offhand in this regard is Steve McQueen’s 2008 Irish prison drama, Hunger. In that film, there’s a 16 minute uncut scene of dialogue between two characters in one static shot. While the conversation between Robert and the priest doesn’t approach that length in a single shot, the camerawork and editing make it cohesive. Again, these conversations are the absolute crux of the film and don’t allow you to look away for a second. 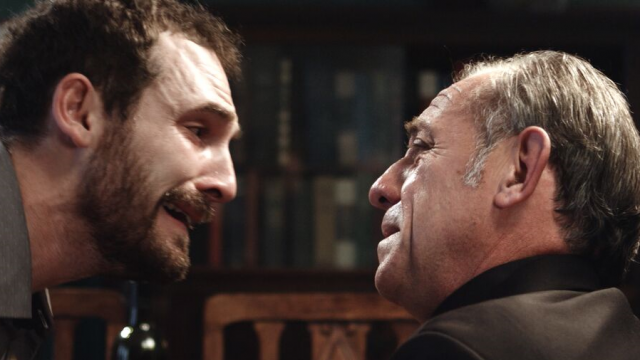 While Sacred Heart is a truly distressing, yet rewarding, watch from start to finish, there are a few small problems. It does take a little bit to get going with the good stuff starting at about 30 minutes in. At one point, there’s a mostly nonverbal scene between Robert and a warehouse boss (Panda Likoudis) eating chicken. Robert is there to acquire information but the scene is unlike anything else in the film and seems a tad out of place. Also, the ending may be somewhat polarizing among viewers. Obviously, we won’t ruin it here but it’s another instance of a scene that feels out of place. The film could’ve been cut off a few minutes short to leave a more ambiguous, and lasting, ending.

Nonetheless, Sacred Heart is a piece of independent cinema that film fans won’t want to miss. While some films that question religion can be hokey and meandering, this one never reaches that point nor does it ever become preachy. Throughout the majority of the runtime, your eyes are glued to the screen as you hang on every word. Backed by excellent performances from its two lead actors, hopefully Sacred Heart is a sign of things to come from director Kosta Nikas. With this film, Nikas has crafted a superb dramatic thriller that’s nothing more than two men having a conversation. That’s most certainly a feat in and of itself.

*Sacred Heart is available for purchase on Blu-Ray, DVD, and video-on-demand here.*