Have you ever watched something where, as soon as it was over, you just shut off your television and carried on as if it never happened? There are a number of factors that contribute to this type of reaction. The most obvious one is watching a straight up bad film but that’s not really what we’re talking about here. No, we’re referring to those mind bending, acid trip type of films that come along every now and again. It’s like the first time you’re exposed to David Lynch films like Eraserhead and even his later works like Lost Highway and Mulholland Dr. Though, after repeat viewings and discussions, you can start to make sense out of the madness. For film students, it’s surrealist films like Luis Buñuel and Salvadore Dali’s Un Chien Andalou that open you up to a whole new, and perhaps undesirable, world of stream of consciousness filmmaking. This is basically what you get with Michael Reich’s feature length debut, She’s Allergic to Cats.

The film stars Mike Pinkney playing a dog grooming and aspiring filmmaker version of himself. In his free time, he creates strange video art and brainstorms ideas for his all cat remake of Brian De Palma’s adaptation of Stephen King’s novel, Carrie. He also lives like a slob in his rat infested apartment and is always upset about them eating his bananas. Because of this, he regularly slips into a hypnotic lo-fi dreamscape that’s reminiscent of his video projects. However, he soon meets the girl of his dreams in Cora (Sonja Kinski). The two go on a date where they find a lost dog and chat about films like Congo and Howard the Duck before it descends into a chaotic mess by the film’s end.

The plot. Just look at it. It’s all over the place. Now, we can’t rip it apart because the surreal and unhinged nature of the film is most certainly intentional. Michael Reich did exactly what he wanted to do with She’s Allergic to Cats and the film is commendable in that regard. It’s described as semi-autobiographical as Reich spent time grooming dogs and documenting the underground punk scene in Los Angeles. There are so many indie films that come out with the most stock storylines and melodramatic acting but Reich doesn’t go that route. Sometimes it’s best to just “write what you know” and that’s the approach that Reich takes as wild as it may be at times. 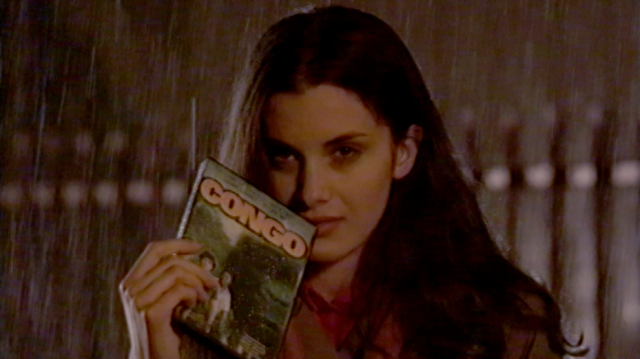 Though She’s Allergic to Cats is only his first feature, Reich isn’t a novice filmmaker. He has directed music videos for name artists like My Chemical Romance, The Shins, Bad Religion, and Ryan Adams in the past. This experience seems to find its way into his non-music work as well. The surrealist “fever dream” scenes all seem to tell a brief story in relation to the plot points in the film and use many different methods in doing so. Obviously, there’s the bizarre imagery but there are also repeated phrases, visual metaphors, and even text representing Mike’s feelings at the time. A lot of modern music videos do the same by telling a story over the course of a song. It should be mentioned that most of these scenes are the most entertaining of the entire film especially when coupled with Jonathan Mandabach’s Twin Peaks-esque score. Reich also makes an interesting visual choice going with the low quality VHS tape look for the entire film. There’s something kind of fun about it. It’s like a less clean version of David Sandberg’s Kung Fury.

When it comes to the film’s cast, it’s difficult to really come up with anything definitive to say. Sonja Kinski is the most likable of the bunch as the lovely, yet still quirky, Cora. She’s actually the granddaughter of the late Klaus Kinski whose performance in Nosferatu the Vampyre was covered on this site last October. Frankly, most of the other cast members are just kind of odd. The lone exception is Flula Borg’s Sebastian who gives Mike and his cat version of Carrie the look of confusion it deserves. Speaking of which, Mike Pinkney is just about the strangest leading man you could have in a film. This isn’t a critique of the real-life Pinkney but the version of himself he plays onscreen. He’s not the most likable character ever but he’s also not unlikable. Though there are times where his antics are insufferable, you can’t help but stick around to see what ultimately happens with his character. Again, it’s hard to say anything definitive about a film like this. If nothing else, he fits with the overall tone extremely well. 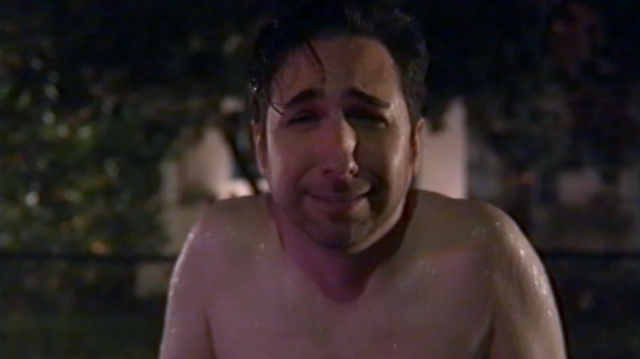 Now… the real issues. For some prospective viewers, it’d be easier to just say that everything about She’s Allergic to Cats is a negative. It’s an unpleasant film that’s filled with some gross stuff and a cast of characters that no one could possibly care about. If you’re not into looking at a strange man-child wallow about in his scummy apartment, eating Cheez-Its, drinking juice boxes, and driving a beat up old van, this film isn’t going to sway you. Likewise, if you don’t appreciate extremely offbeat humor or extended scenes of someone expressing a dog’s anal gland (yes, that’s a real thing), then you definitely aren’t going to enjoy this. Yet, there are some people that are going to love the eccentricity and bizarre nature of the film. Experimental film students especially will probably get a kick out of what Reich is doing here.

… How do you even rate this thing? As a traditional narrative, it’s absolutely horrible. This isn’t really a traditional film though, is it? Honestly, this is a film that we just can’t put a star rating on. While it’s true that all film is subjective, it’s even more true with She’s Allergic to Cats. No star rating is going to suffice for something this divisive. Instead, it’s like a choose-your-own adventure type of rating system on this one. Fill it in however you please. It’s not that it’s completely incomprehensible. It’s just weird for weird’s sake. For some, it won’t even resemble a movie. It’s just a bunch of goofy stuff happening on a screen. Others will find it invigorating as they look for hidden meanings and simply enjoy the offbeat nature of the whole experience. For us, we have to give credit to Michael Reich for crafting something different and doing it his way. With She’s Allergic to Cats, Reich puts all of his filmmaking abilities on full display. Though, maybe we don’t exactly need all of them in whatever Reich does next.

*She’s Allergic to Cats is currently available for rent or purchase on video-on-demand platforms like Amazon Prime. Check out the trailer below.*