Back at the tail end of 2017, we reviewed the debut feature from director Kévin Mendiboure entitled The Follower. While we didn’t give the film an overall positive score, we admired how well made the film was. In addition, the first half of the film was very unique and effective within the confines of its found footage style. However, as sometimes happens in independent features, the second half felt like a departure from how the film began. One of the beauties of short filmmaking, though, is being able to keep a story concise and focused without having to stretch it to a full 90 minutes. Mendiboure’s newest short, The Mannequin, is a perfect example of this as it maintains the director’s eye for cinematography and great shots while maximizing its brief four minute story.

The film follows a young woman named Alexia (Alexia Zahedi) who’s alone in her house. She communicates with her boyfriend via text message as she awaits his arrival. While in the bathroom, the lights go out and something begins to pound at the door and rattle the handle. It appears that there may be something evil lurking in Alexia’s home. Upon investigating, Alexia keeps catching sight of an eerie mannequin that may or may not be the source of her torment.

Just like Denial and H-24, two previous five-minutes-or-under shorts reviewed on this site, the plot is short and sweet. Similarly to the recently reviewed Count the Clock production of The Knock, The Mannequin is basically your typical horror fare with a young woman being stalked in her empty house. This is day one horror stuff but there’s a reason that fans of the genre have embraced countless versions of this tale. It’s because the premise is effective. The same can be said here for The Mannequin. Mendiboure wastes no time putting the plot into motion. He doesn’t go overboard or get too cute with the idea and, instead, simply focuses on building the suspense. Alexia Zahedi deserves a lot of credit for her performance as the film’s lone cast member as well. She keeps the story moving along and she plays the role well. 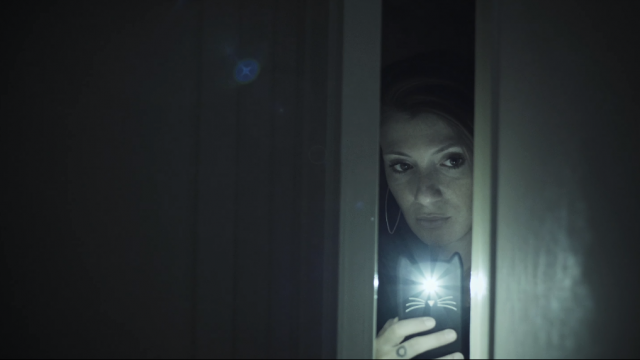 Like his previous work on The Follower, Mendiboure’s real talents as a filmmaker are in aesthetics. From start to finish, The Mannequin looks fantastic. Even in frequent darkness, the shots remain sharp and the camerawork does its job telling the story. There’s no spoken dialogue in the film (just a few text messages between Alexia and her boyfriend) so Mendiboure uses other means to weave his tale. Point-of-view style camera shots, tense music, and Zahedi’s performance are all relied on to tell the story rather than multiple characters and dialogue. Luckily, all of these things are done extremely well and make the film unique in its approach.

That being said, some of the things that make The Mannequin commendable can also be called into question. The film’s simple and conventional horror story is effective but may leave viewers wanting more out of it. We’ve seen many stories similar to this in the past and The Mannequin doesn’t really set itself apart. Moreso, it nestles itself firmly in with those. It relies on cliches like the lights going out or things inexplicably moving instead of taking these tropes and turning them on their head. You could also make the complaint that Alexia experiences something terrifying and then basically ignores that it happened a minute later. Now, it does seem like maybe she thought she hallucinated the experience but it’s such a quick turnaround that you could miss that detail the first time around.

Luckily though, the issues with Kévin Mendiboure’s The Mannequin are nitpicky at worst. The fact of the matter is that the film is very competently made and provides a satisfying horror tale for genre fans. It settles on the bare essentials with its classic horror themes and tropes to tell its story. Like he did with The Follower, Mendiboure shows his keen eye for filmmaking and oodles of talent as a visual storyteller. That’s something quite rare as a lot of indie filmmakers focus on a convoluted written story instead of character and filmmaking fundamentals. Like the other aforementioned five-minute-or-less short films, The Mannequin excels because of its limitations and is a quality piece of short horror cinema.