Growing up and aging can sometimes be a bitter pill to swallow. People can mature, become morally sound, develop new or different interests, or in some cases, fully succumb to their own demons. People may grow apart due to their life choices and vices but everyone has those few people that they’re always drawn to despite the circumstances. This is the exact focus of Ryan Brookhart’s new film, Two Ways to Go West, as three childhood friends explore the reaches of their drifting friendship over a wild weekend in Sin City, USA.

The film centers on three childhood friends, Gavin (James Liddell), Marty (Paul Gennaro), and Shane (Drew Kenney) getting together for a bachelor party in Las Vegas. Gavin is a recovering addict and former television star who has a bit of tension with the soon-to-be married Shane from something in their past. Marty, on the other hand, is happily married and serves as a voice of reason between the two of them. After a night out, the three return to their hotel where unresolved issues and an inciting incident featuring Gavin’s “savior” girlfriend, Addy (Levy Tran), cause Gavin to relapse and spiral out of control. The friends, now turned enemies, are forced to face their issues head-on to salvage the remnants of their relationship.

The plot of Two Ways to Go West is pretty simple overall. Ultimately, it’s just three guys in a room facing all of their past demons and personal imperfections. The film never tries to go too overboard with its ideas or Las Vegas location. This definitely isn’t The Hangover or anything like that. It’s a realistic tale about people who’ve remained friends but have clearly grown apart over the years. It’s also about letting go of things that no longer matter and trying to move forward. Of course, that’s always easier said than done as so many people often tend to live in the past. The film constantly tests the friendship between Gavin, Marty, and Shane and is sure to trigger memories in its audience as well. We’ve all had that person who has gone on and left us behind to do other things or someone whose lifestyle we don’t approve of yet somehow managed to remain close with. For some people, there’s an inexplicable bond between them and this film does a very good job of exploring that. 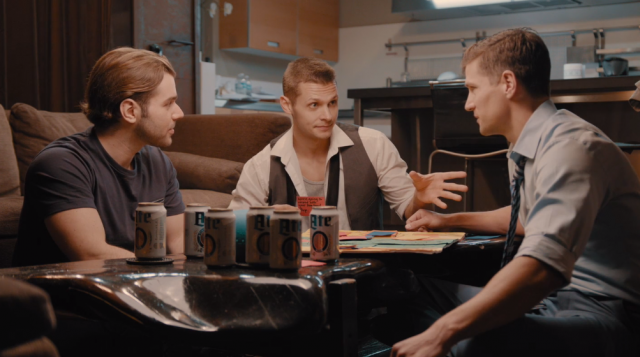 In the past, we’ve seen some very intriguing dialogue driven independent films like Sacred Heart and, more recently, Disclosure. Written by one of its stars in James Liddell, Two Ways to Go West certainly reaches some of the same heights as those films. There are some very heartfelt conversations between characters that stand out as probably the best scenes in the film. Specifically, there’s a scene towards the end with Gavin and Shane and another with Gavin and Addy that’s as touching as it is dramatic. Liddell does an excellent job building tension between characters and producing compelling dialogue that draws viewers into the story. Though, the film often descends into typical “guy talk” about women and, oddly enough, food. There’s a specific scene that goes on far too long about pickles and Gavin’s dislike for them that adds little substance. It also comes at one of the worst times during the turning point of the film with Gavin’s relapse into his addictions.

Perhaps even more important than the script, in this case, is the cast that’s tasked to deliver it. All three male leads succeed in this regard. On top of handling screenwriting duties, Liddell’s Gavin is also largely the focus of Two Ways to Go West and does very well in the film. When he’s sober and level headed, Gavin is quite likable and sort of misunderstood by his friends. After his relapse, he’s a loose cannon and almost terrifying at times. This side of Liddell’s performance is maybe a bit too much for the tone of Two Ways to Go West (more on that in a moment) but it would’ve been great in something more along the lines of a thriller. Paul Gennaro, again, provides a voice of reason and is basically a victim stuck between his destructive friends. The character is unwavering and provides a firm moral base. Meanwhile, Drew Kenney’s Shane is the film’s true standout. Despite only hinting at parts of his sordid past, Shane is a complex character that’s defined by his flaws. Kenney gives a naturally charismatic performance and is quite funny at times. Though the film really tries to paint Shane in a negative light, he’s actually the most likable character. He acknowledges the bad things he has done in his past and even learns some commendable traits from his friends by the film’s end. 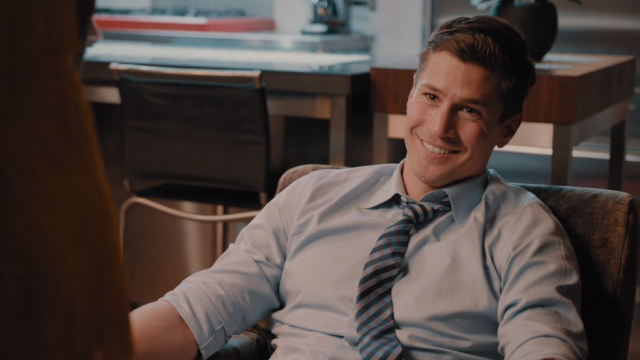 Tonally speaking, Two Ways to Go West is a little all over the place and the overall product does suffer from it. It starts off as a buddy picture between three longtime friends before they start going at each other’s throats. Then, after the film becomes more of a drama, Gavin’s somewhat psychotic relapse gives off almost a horror/thriller vibe where you think things are really going to get wild. However, every time tension reaches a fever pitch, the film brings itself back down. There’s a constant ebb and flow that will snag the audience’s attention and then let them go wander off again. It’s unfortunate that it keeps letting you go because there’s some really good stuff here. The film has a sound message and story to tell, it’s shot and put together extremely well, and the cast really maximizes their characters and script. It just can’t seem to sustain all of it for the full runtime with its start-and-stop approach.

Even though it’s tonally inconsistent, Two Ways to Go West is still a film with merit. Director Ryan Brookhart spearheads a well made production while screenwriter/co-star James Liddell pens an emotional script with some firm moral ground. Another unfortunate thing is that the film couldn’t take advantage of its Las Vegas locale. Instead, viewers are trapped in a small hotel room for most of the runtime. It’s understandable as Las Vegas probably costs a fortune to film in the city proper but other workarounds could’ve been made as well. Despite all of this, Two Ways to Go West is worth checking out. It’s not a home run of a film but it’s still a commendable independent production with its cast and script being the highlights.

*Two Ways to Go West is currently available for rent or purchase on video-on-demand platforms like Amazon, Google Play, YouTube, and Tubi. Check out the trailer below.*