When it comes to films about inner city issues and life on the streets, things don’t always turn out so rosy. Criminal activity, drug use, and violence often pad the runtime of these types of films even if the overall message is a positive one. However, writer/director Paul Starkman decides to show something somewhat different in his debut feature. Instead of magnifying the darker side of inner city living, Starkman takes a more blue collar approach with his film, Wheels. Here, the filmmaker focuses on normal middle class citizens currently stuck in their given situations but also refusing to succumb to them.

Taking place in Brooklyn, the film follows a young aspiring disc jockey named Max (Arnstar). When he’s not working at the local grocery store, Max learns his trade from fellow DJ, Monty (Ioan Delice), and accepts small time gigs on the side from neighborhood thug, Oscar (Kareem Savinon). Though, Max’s turntables often hinder him from putting on his best performances. Things worsen when his brother, Terry (Joshua Boone), returns from a stint in prison. Despite Terry’s best intentions, life on the streets proves to be difficult as both he and Max find themselves unable to better their respective situations without getting in with the wrong people.

The first thing some people may notice about Wheels is its similarities to other films. The good news is that Starkman’s script does feel original and doesn’t explicitly rip anything off. However, a number of titles do come to mind. Given the film’s story, hood films from the early to mid 1990’s, such as Boyz n the Hood and Friday, are obvious comparisons. Max and Terry’s inner city struggles and dealings with bullies/criminals give off the vibe of these early hood films and a relatively timeless story makes Wheels feel as if it was made back in the 90’s as well. Another less obvious connection is to Tony Kaye’s masterful 1998 film, American History X. The dynamic between brothers Derek and Danny in that film is similar to the one shared by Max and Terry as is the predicament they find themselves in as the film reaches its climax. While the two films differ greatly in some ways, there are certainly some overlapping messages of personal reform and forging one’s own path in the face of adversity. 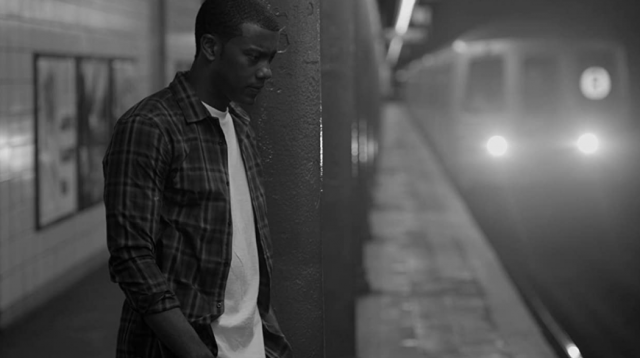 Wheels‘ story and message is communicated mostly by a quality screenplay from Starkman and some very solid acting from the film’s cast. Starkman makes sure that his dialogue never gets too wordy, preachy, or unnatural while allowing the performances to really make Wheels come to life. The writer/director’s dedication to telling an uplifting tale of following one’s dreams is evident over the course of the film’s runtime and doesn’t come off as cheesy either. Rapper and Brooklyn and Harlem native, Arnstar, is very good in his first starring role. There are moments where it seems like he may be reciting lines but, for the most part, he proves to be a convincing leading man. Joshua Boone is probably the standout with his facials and quiet brooding/contemplation speaking volumes more than any scripted lines could. Even though Arnstar’s Max is the vehicle through which the story flows, it’s Boone’s Terry that’s the soul of the film. In addition, Kareem Savinon and Shyrley Rodriguez have memorable roles as Oscar and Max’s love interest, Liza, respectively. Both add flavor to the film and provide additional subplots for the main characters.

Where Starkman and his crew really shine, though, is in the technical department. With its monochrome color palette, Wheels is a gorgeous film to look at. There’s just something about the film that pops in beautiful black and white that couldn’t be replicated in full color. As previously mentioned, there’s a timeless quality to Wheels that’s only enhanced by an unconventional aesthetic choice. Again, the film often feels like American History X with its black and white flashback scenes and it’s certainly not a bad thing as Wheels just wouldn’t be the same without this visual choice. All credit goes to Ariel Boles for the cinematography. Additionally though, Mario Grigorov Stanners does some great work on the film by adding to the aforementioned timeless quality with soothing piano pieces mixed in with catchy song choices for the soundtrack. Of course, being a film so heavily focused on music, having it be a major part of the film was a no-brainer. Everything is done to perfection in this regard. 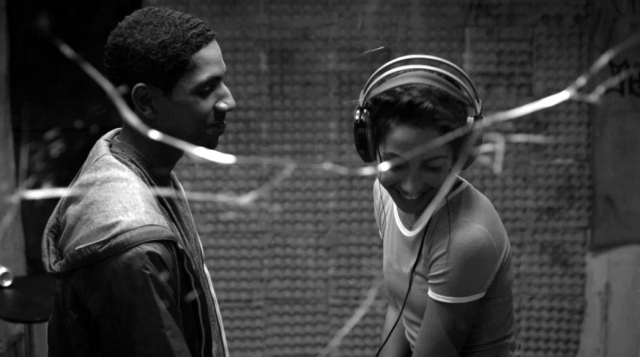 If there was anything to get down on Wheels about is that there’s a little too much going on for its own good. There’s a very engaging story here with estranged brothers struggling to make ends meet as they turn their lives around. Then, you add in that they’re against some kind of foe in the form of Savinon’s Oscar. Also, there’s a plotline about their grandmother suffering from memory loss that goes nowhere. Max’s relationship with Liza becomes a brief focal point but doesn’t have a ton of bearing on where these characters eventually end up. Finally, you have Max’s passion and desire to be a successful DJ that too often gets lost in the shuffle. There are just so many ideas crammed into a quick 80 minute runtime that there isn’t nearly enough time for all these subplots to be heavily featured. That being said, everything that’s included here is done well. It’s just that maybe the film only needed a handful of these ideas instead of all of them.

Despite maybe too many storylines going on, Wheels is still a very compelling and entertaining drama about inner city individuals trying to make names for themselves. While many films focus mostly on the negatives of inner city living, Wheels feels perfectly at home in its element. Sure, there are obstacles to overcome but it’s a person’s will and individual strength that allows them to succeed. There’s a positive message behind this particular story and, once again, something that’s just timeless about it too. While maybe not as memorable or iconic as something like Boyz n the Hood or Friday, there’s still a lot to like about Wheels and it’s certainly worth a watch for its merits alone.

*Wheels is currently available for rent or purchase on video-on-demand platforms like Amazon, Google Play, Vudu, and YouTube.*