When Quentin Tarantino burst onto the scene with his 1992 debut, Reservoir Dogs, and his Oscar nominated sophomore effort, 1994’s Pulp Fiction, Hollywood had its next legendary filmmaker. With Tarantino’s originality and expertly crafted dialogue, the writer/director’s best work was surely ahead of him after a promising start. Fast forward to the present day and Tarantino still remains in that legendary category. Yet, he has kind of fallen into a rhythm. Wonderful acting and brilliant set pieces only go so far when every film is a sprawling three hour epic with violently psychotic endings to each one. Sometimes you just want something on a smaller and more personal scale. For that, look no further than Russian filmmaker Kirill Sokolov’s feature length debut, Why Don’t You Just Die!, which manages to harness all the things people love about modern day Tarantino in the span of only 100 minutes instead of 180.

The film opens with a young man named Matvei (Aleksandr Kuznetsov) knocking on an apartment door with a hammer hidden behind his back. He’s greeted by his supposed girlfriend, Olya’s (Evgeniya Kregzhde), father, Andrei (Vitaliy Khaev), and welcomed into the apartment. Though, Matvei soon accidentally drops the hammer on the floor and Andrei, a police detective, becomes suspicious of Matvei’s intentions. The two start to fight with Andrei getting the better of Matvei. He handcuffs Matvei and leaves him in the bathtub before prying answers out of him. From here, more of the story is relayed to the audience involving crooked cops, an ignorant wife, a scorned daughter, and all the bloody violence one can handle.

Like many of the recently positive reviewed films on this site, the plot for Why Don’t You Just Die! is relatively simple. Matvei is sent to kill Andrei because of previous wrongdoings by Andrei to Olya. Though, the film doesn’t play host to any reliable enough characters to know who’s actually in the right. After the initial fight between Matvei and Andrei, the story and motivations are told through flashback sequences that add more complexity to the story as it continues. In the case of this film, writer/director Sokolov handles the plot perfectly. The film is almost laid out in chapters where the flashbacks go on to set up the next action scene. Even though the plot gets increasingly complex, viewers will never lose sight of what got them to each point in the first place. 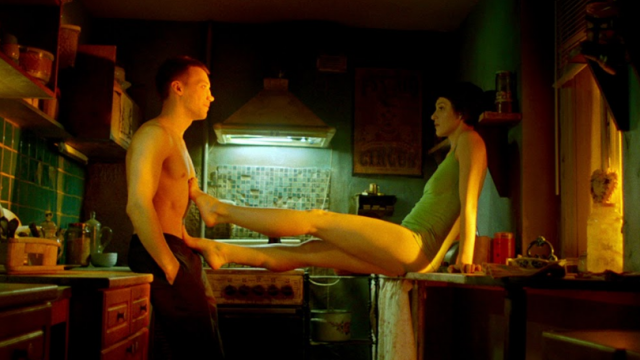 Like Tarantino’s Reservoir Dogs, Why Don’t You Just Die! is filled with characters who you simply can’t trust. Kuznetsov as the protagonist, Matvei, is probably the most reliable character as he remains committed to killing Andrei because of what he’s done to Olya. However, Khaev’s Andrei pleads his innocence in the matter which causes you to wonder if he’s lying or if it’s Olya who’s untrustworthy. Later, you also learn that Andrei played a part in some shady dealings with his partner, Evgenich (Mikhail Gorevoy). The only character throughout the entire film who’s mostly an innocent is Andrei’s wife, Natasha (Elena Shevchenko), and even she’s not entirely clean in the matter. These are five characters who maybe don’t enjoy the brutality they have coming to them but they’re not undeserving of punishment either. That being said, they’re all strangely likable just as the cast of criminals are in Reservoir Dogs.

Of course, the best thing about the film is its brutal violence. If you’re a fan of films like The Evil Dead franchise, Korean revenge titles like Oldboy, and the aforementioned Tarantino gore-fests like Kill Bill Vol. 1, then Why Don’t You Just Die! is right up your alley. Sokolov and company take a somewhat realistic approach to the violence with its gritty and torturous aspects but, as confirmed by the title, all the characters have a hard time staying dead despite losing buckets of blood. The violence is graphic so it’s certainly not for the faint of heart but action and horror fans should be more than pleased here. A recent comparison for the film would be something like last year’s Ready or Not. Both feature violently bloody kills with a lot of darkly comedic aspects throughout. Simply put, both films are a lot of fun and you’ll always be anticipating how the story will twist, turn, and abuse its characters next. 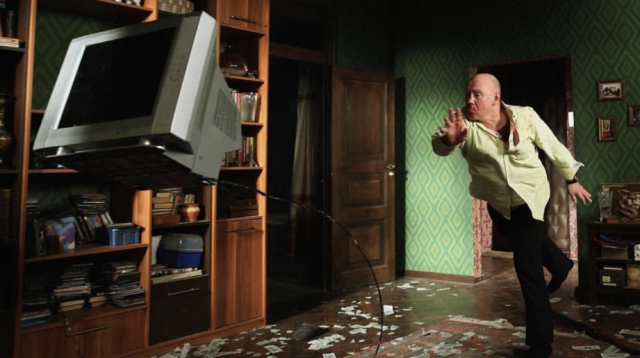 Perhaps though, that may be the biggest issue with the film overall as well. It ultimately feels like a heavily influenced product. The biggest one is obviously Tarantino as we’ve referenced at length. Even the scene where Matvei is trying to get a bobby pin to unlock his handcuffs feels reminiscent of the  “wiggle your big toe” or burial scenes in the Kill Bill movies. Matvei’s weapon of choice being a hammer is, no doubt, a nod to Chan-wook Park’s Oldboy. Then, the violence can be attributed to nearly any splatstick horror comedy of the last few decades. Though it does all these things extremely well, Why Don’t You Just Die! feels like those films and not always completely like its own thing. When the film constantly has you thinking of other films instead of what you’re currently watching, it can’t go unaddressed as a potential issue.

Regardless, there’s still too much to like about Sokolov’s feature length debut to condemn it. With the film mostly taking place inside Andrei and Natasha’s apartment, the location never gets stale and that’s a testament to Sokolov’s skill as a filmmaker. He exhausts every possible camera angle and shot over the film’s runtime and constantly comes up with interesting ways to keep the story going visually. We also have to praise the music from Vadim QP and Sergey Solovyov which spans countless genres and perfectly fits every scene with catchy themes and emotion. Even though it sometimes feels like a hybrid of influences, Why Don’t You Just Die! is an excellent feature debut for Kirill Sokolov and puts his talents as a filmmaker on full display. For fans of any of the aforementioned films in this review, definitely go out of your way to give this one a shot.

*Why Don’t You Just Die! is available for purchase on Blu-ray and DVD from retailers such as Amazon on April 21st.*