The film opens with Stella Marie (Eliza Boivin) arriving at a seaside estate for an invite-only charity ball held by a mysterious foundation. Donning a masquerade mask and being stamped with a codename to maintain anonymity, partygoers engage in sinful acts with charming foundation figurehead, Christian AKA X (Hope Raymond), serving as the evening’s host. Stella heads into the ball but is exposed Christian for not receiving a proper invite. Christian allows Stella to stay while also fearing that her former friend could be trying to reveal a dark secret. Christian, whose interest in her guests is mostly voyeuristic, captures a crime on a secret camera in her guest bathroom that threatens to ruin her and uncover what really goes down during her glorified sex parties.

Self-described as a “Hitchcockian mix of melodrama, thriller, and camp,” X certainly tackles a number of different genres. The film has a very obvious Eyes Wide Shut vibe from the start with its anonymous sex parties. Though far less sinister and exploitative, there’s definitely a level of eroticism to these scenes as guests experience everything from lustful excitement to uncomfortable shame during their time at Christian’s estate. There’s also the Hitchcockian voyeuristic aspect as most of Christian’s pleasure comes while watching her guests’ in the bathroom via a hidden camera. It’s like a more violating and self-serving Rear Window as Christian uses these videos to fuel her own disgraceful fantasies. It’s only when she bears witness to a horrible crime that she starts to feel as if she’s doing something wrong. 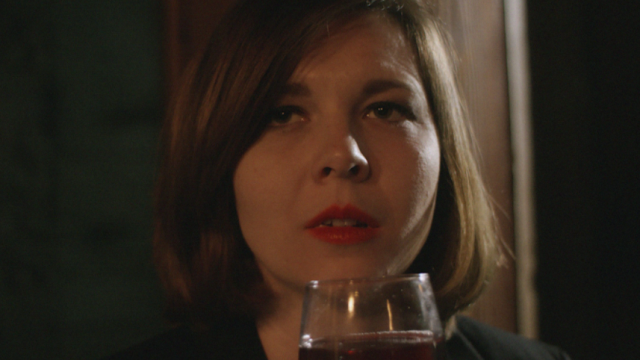 Despite Christian’s obscene pastime, she’s not the least bit unlikable. Hope Raymond deserves a ton of credit for her performance as she takes what would normally be a villainous character in any other film and basically turns her into a victim. In a film like Eyes Wide Shut, it’s the people organizing these lewd parties that need to be brought down. Here though, the guests appear to love the experience while Christian is left questioning her own morality and fearing for the safety of the very people that she exploits. Raymond plays the character as someone who’s not necessarily comfortable in her own skin even though she must ooze confidence in front of her guests. While her acts are contemptible, yet not intentionally hurtful, she feels responsible for the safety of the guests and the integrity of the ball. The rest of the cast is very good too with Eliza Boivin’s Stella providing a suspicious wild card threat to a skeptical Christian. Also along for the ride is Christian’s business partner and most trusted friend, Danny (Brian Smick), who serves as a voice of reason and Jackson (Zachary Cowan), another face from Christian’s past who has questionable intentions. There are a few notable appearances from Valerie Façhman as the forgetful Lynda Rue that mostly play for laughs and/or sympathy as well.

While the characters do a lot of the heavy lifting in making X an engaging experience, the filmmaking on display here by Scott J. Ramsey and crew is admirable as well. As we’ve stated before in previous indie film reviews, sometimes budget constraints can make a film feel lifeless, hollow, and even stagey. That’s not a problem for X as the seaside estate feels like a living, breathing entity. There’s always activity going on within the house and it legitimately feels lived in while also doubling for a den of seduction. As has been the case in other low budget films with one main location (i.e. Reservoir Dogs or Saw), sometimes it’s best to simply exhaust said location instead of overcomplicating matters and moving around too much. It’s much easier to focus on storytelling when you’re not busy bouncing from place to place. There are some striking fantasy visuals throughout X too as Christian imagines herself in scenarios with specific characters. These colorful scenes (and one that’s drained of color) make for a nice contrast to the film’s otherwise warm tone and provide some of the film’s most memorable moments. In addition, X was crafted to be an immersive multimedia experience with a soundtrack, “At the Devil’s Ball,” with music from goth-pop duo The Major Arcana, set to be released on February 16th. Standalone music videos will also coincide with the release of the soundtrack. 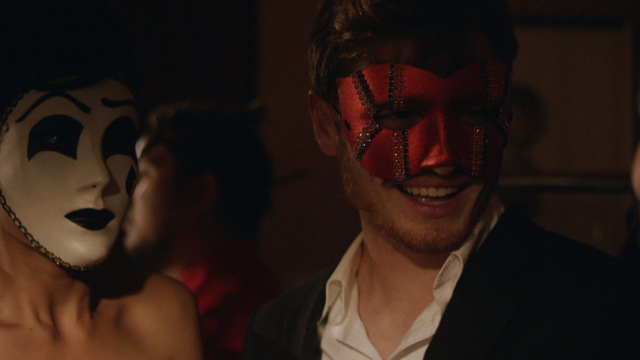 However, as is always the case in filmmaking, X does have a few noteworthy issues. One of the more unfortunate ones is that it appears that most of the dialogue is overdubbed. Now, this seems that it may have been unavoidable at times as Ramsey notes in his filmmaker’s comments that “the constant roar of the waves crashing on the Big Sur coast and the muffling effects of masks” caused them to have to re-record most of it. It’s not always noticeable but there are definitely moments that may take viewers out of the film for a second. The main problem here, though, is that, due to the mixing of genres and ideas, it feels like the film just gets a bit long by the end. It seems like X gets caught up doing so much that it becomes confused by what story it wants to tell. Is it a psychosexual thriller or a comic melodrama? Is it a statement on LGBT issues or a simple tale of morality? Honestly, the film could really go any of these directions because it does everything quite well. Yet, it decides to go in pretty much every direction and feels a little bit bloated because of it.

Still, X is a very enjoyable experience and certainly worth the time if you’re not turned off by taboos. Scott J. Ramsey and Hannah Katherine Jost put together a pretty weird flick at times but storytelling and characters are never sacrificed for spectacle. As lost as it sometimes gets in the last act, the film doesn’t abandon its audience and does deliver a satisfying overall conclusion. Bolstered by a wonderful performance by Hope Raymond, X‘s biggest accomplishments are in its character and world building. The story takes you on a moral journey that most viewers probably wouldn’t expect from what amounts to be a psychosexual thriller at its absolute core.

*X is currently available for rent or purchase on video-on-demand platforms like Amazon, Google Play, Vudu, and YouTube.*