In 2017, there’s no question that people love superheroes. Since 2008, Marvel Studios has dominated the box office with their big screen adaptations of their characters. With their eye on the biggest, bombastic films possible, they’ve attempted to include as many of their properties as possible into their Avengers story arc. However, there are a number of other heroes that Marvel has rights to that don’t necessarily fit into the bombastic. In 2015, Netflix and Marvel teamed up for to introduce an Avengers-like group called the Defenders. Most recently, the newest and final member of the Defenders has been introduced in Iron Fist.

Four years ago, Drew Goddard approached Marvel Studios with the idea of doing a new film based on the character of Daredevil. Previously, the character’s movie rights were owned by 20th Century Fox. After a long period of inactivity, the rights reverted back to Marvel and allowed them to include the character into the MCU. Though, Daredevil mainly sticks to his own territory in Hell’s Kitchen. In regards to this, Marvel decided to produce a television show within the MCU instead of a feature film. On top of that, they optioned shows for three more superheroes: Jessica Jones, Luke Cage, and Iron Fist with the heroes eventually teaming up in The Defenders. Netflix answered Marvel’s call for distribution and here we are.

The comic book character of Iron Fist debuted in 1974 in Marvel Premiere #15. He was created by Roy Thomas and Gil Kane as a marital artist and wielder of the mystical force known as the Iron Fist. The Fist allows the character to summon and focus his chi. In the past, he has been the star of his own comic series as well as teaming up with Luke Cage and joining the New Avengers. He was also a brief member of the Defenders in the comics.

In the Netflix series, Danny Rand (Finn Jones) returns to New York City to reclaim his father’s company after being presumed dead for 15 years. He survives a plane crash in the Himalayas that claimed the lives of his parents. Danny grows up in a monastery in K’un Lun, a lost city located in another dimension. Upon his return, he immediately seeks out Harold Meachum (David Wenham), his father, Wendell’s (David Furr), business partner at Rand Enterprises. Upon learning of Harold’s death, he reunites with Harold’s children, Ward (Tom Pelphrey) and Joy (Jessica Stroup). He also befriends Colleen Wing (Jessica Henwick) who runs her own dojo. Soon, it’s revealed that Harold is still alive under the instruction of The Hand; an order of ninjas who engage in organized crime who the Iron Fist recognizes as his sworn enemy. 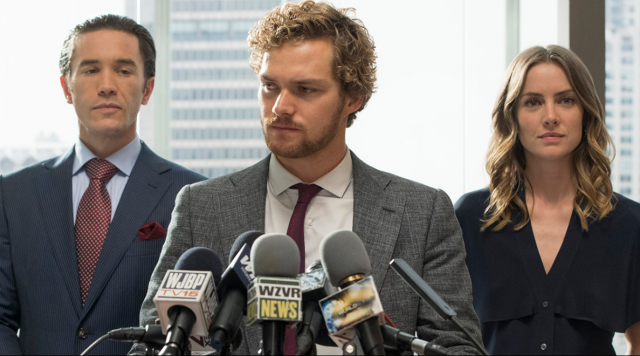 Much of the first season of the show revolves around building its characters. There’s a lot of time spent on the aforementioned characters and the ebbs and flows of their relationships. Danny frequently clashes with them due to not understanding the modern world because of his time away. He also stirs up trouble as people learn of his powers as the Iron Fist which he doesn’t necessarily hide. Harold sees him as a way to break away from The Hand and take his life back. Ward and Joy are often at odds on how they feel about Danny’s return despite their familial bond. Colleen becomes Danny’s closest friend along with Claire Temple (Rosario Dawson) who’s a recurring character on all of Marvel’s Netflix shows.

Like the previous shows, the characters are the driving force of the show. Finn Jones as Danny Rand isn’t quite as likable as Mike Colter’s Luke Cage but he’s not bad either. He feels somewhat gullible and mostly takes everyone’s word at face value which can get a bit irritating at times. Jessica Henwick and Rosario Dawson are both fantastic in their roles and bring some complexity to the overall story. In addition, Tom Pelphrey is great as Ward. He can be despicable and coarse but it’s easy to understand his frustrations. He’s frequently used as a pawn in someone else’s game. He’s a redeeming character despite his flaws and a much needed complexity on the show. 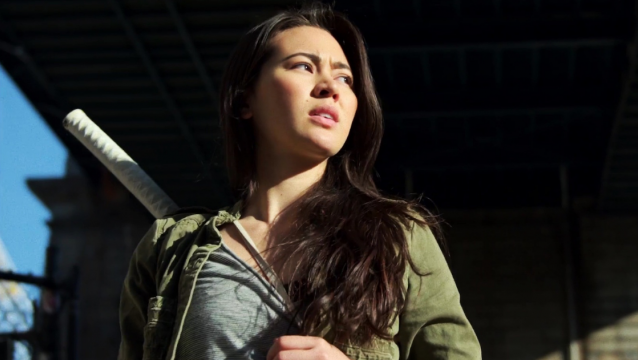 Unfortunately, Iron Fist has quite a few negatives especially when compared to the other Defenders. The fight scenes are mostly uninspired and bland. It’s even more true during the first two episodes which are actually hard to get through. This is a massive issue with an action oriented show based on kung-fu. The fight scenes do get better as the show goes on but there’s nothing we haven’t seen before elsewhere. There are also too many instances of characters going back and forth on an issue. For the first few episodes, the Meachums don’t believe that Danny is who he says he is. While it’s initially understandable, the conversations exhaust themselves quickly.

The biggest issue in Iron Fist, though, is in understanding the character in general. The only backstory you get about Danny is in flashbacks or exposition from the characters. You never fully grasp who or what the Iron Fist is. Danny tells some of his colleagues what it is but it’s such an abstract description that it’s still hard to understand what it does or why it’s important. This basically strips away any motivation behind the entire show and kills any reasoning for caring about it.

Iron Fist is the worst of the Marvel shows on Netflix by far. That’s not to say that it’s unwatchable but it’s hard to get fully absorbed into a character that you don’t fully understand. Strip away the superhero aspect of the show and there may be a semblance of what it’s about underneath. Unfortunately, though, this is a superhero show that features a hero who’s not all that super. Iron Fist has moments you can truly enjoy but, for the most part, it’s a hollow experience with some redeeming characters. As per usual, the series has been set up for a second season. One can only hope that the showrunners can correct their mistakes and get Iron Fist on par with its peers.