We’ve said it before on this site that horror is back in a big way. While there’s still plenty of schlock being released, it’s encouraging to see so many unique artistic visions padding the genre in recent years. Recent horror films like The Witch, A Quiet Place, and even this year’s The Invisible Man have done away with some of the more hokey aspects of horror, built suspense, and packed in effective drama to elicit reactions from viewers. This is exactly the case for Severin Fiala and Veronika Franz’s new psychological horror film, The Lodge.

The film is written and directed by the same duo that helmed 2014’s Austrian horror film, Goodnight Mommy, which we covered a few years back. In all honesty, we could probably use the same introductory paragraph for this new film as we did for Goodnight Mommy. Horror doesn’t have to be all about jump scares and gore. The more cerebral approach taken by Fiala and Franz is more in tune with Ari Aster’s work on 2018’s Hereditary and last year’s Midsommar than horror of old. Unfortunately for The Lodge though, its lengthy, delayed release means it’s going to have to find life on DVD, Blu-ray, and video-on-demand services. It premiered last January at the Sundance Film Festival but didn’t release in theaters until February 2020. Even then, it didn’t get a wide release. This coupled with its similarities to Aster’s Hereditary, may find the film facing an uphill battle in building an audience.

The Lodge opens with a devout Catholic woman named Laura (Alicia Silverstone) being told by her husband, Richard (Richard Armitage), that he wants a divorce so he can marry another woman. Laura doesn’t take the news well and commits suicide. This lands her two children, Aidan (Jaeden Martell) and Mia (Lia McHugh), permanently with their father. Six months later, Richard proposes that they spend Christmas together at their cabin so the children can get to know his younger girlfriend, Grace (Riley Keough), better. However, Aidan and Mia do some research on Grace and discover her sordid past as a former cult member. At the cabin, the children respond somewhat negatively to Grace especially when Richard must fulfill a work obligation back in the city. Uncomfortable and treated poorly, Grace starts to lose her grip on reality especially when strange occurrences start happening inside the family’s lodge.

In terms of plot, the film does some mixing and matching of frequently used horror tropes with its family issues, isolation, and psychological breakdowns. There are elements of classic films like Carrie and The Shining in The Lodge but they’re never blatantly ripped off either. There’s even a little plot twist at one point that feels reminiscent to Tim Burton’s Beetlejuice. Though, this idea is never fully realized and is eventually discarded. What’s probably most admirable about The Lodge is that it doesn’t feel like your typical “cabin in the woods” type of film. It could easily be that but it Fiala and Franz decide to delve a little deeper and make the film less about an unknown villain or force tormenting the cabin’s inhabitants and more about the anguish suffered by a mentally ill character. Frankly, the events of the film feel like something that could potentially happen given some minor tweaks.

In this respect, the small cast does a great job of telling the story. Jaeden Martell and Lia McHugh as Aidan and Mia do an excellent job in their roles. Though they’re skeptical of Grace, their treatment of her doesn’t come off as whiny or exaggerated. Their response to her actually feels natural. This helps to still make them likable even though Grace is the character you should be sympathizing with. As we’ve mentioned a number of times before on this site, child actors can sometimes be hit or miss. In this film though, both Martell and McHugh hit their marks perfectly. Alicia Silverstone is a bit of an odd choice for the quickly dispatched Laura. It’s definitely a different type of role for the actress and her character’s specter does loom over the entire film from her suicide on. The true star of The Lodge is, of course, Riley Keough. As Grace, she undergoes a gradual but chilling transformation over the course of the film. It’s not completely unwarranted either. The story gives us legitimate reasons for the changes due to her past, her mental state, and the issues she’s having with the children. Like the title character in Carrie, Keough’s Grace tries to keep it together until she can’t take it anymore. Yet, she’s not entirely to blame either.

As Grace’s mental state deteriorates, the film consistently builds suspense. The snowy locale mixed with the rustic cabin is a perfect horror movie setting. There’s also no escaping it as they’re snowed in with no vehicle while Richard is away for work and it’s too cold to travel on foot. There’s a helplessness to their situation especially given Grace’s unfamiliarity with the kids. Mementos of Richard’s former wife, Laura, are also scattered all over the cabin and mentally torture Grace. The film does so well building suspense and making you feel like anything could happen. You’re never really sure who’s to blame for the odd goings-on around the lodge. You can’t full trust Grace given her issues but the kids aren’t exactly angels either. On the other hand, maybe they’re all experiencing something supernatural together. Overall, The Lodge is some of the best use of atmosphere in a modern horror film as it just always keeps you on the edge of your seat and anticipating what’s next. 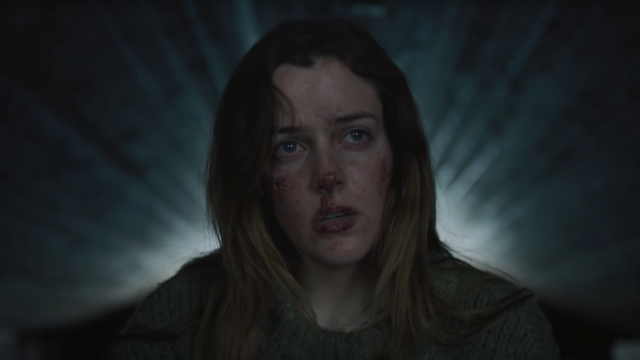 Unfortunately though, there are two major things holding The Lodge back from being in the upper echelon of films in the genre. After all the buildup and suspense, the film really fails to stick the landing. The ending is passable and shouldn’t make anyone hate the movie. However, it feels like Fiala and Franz were onto something interesting before the inevitable twist. Whereas films like Midsommar or mother! go for pure insanity by the end, it feels like The Lodge plays things a bit safer. Obviously, these reviews are spoiler free so we won’t delve into the ending here but we’ll just say that there’s another direction the film could’ve taken but didn’t. The other major issue with the film isn’t really its own doing. It’s the fact that Ari Aster’s Hereditary exists. In recent memory, nothing comes close to trumping Hereditary with its terrifying take on a woman’s fragile mental state mixed with family drama. Both films even use miniature dollhouses in their plot which doesn’t help to avoid comparison. Even though the two films are different, it feels like The Lodge will always be linked unfavorably to its more effective peer.

That being said, The Lodge is still worth a watch for horror fans. While it’s probably going to remind a lot of viewers of Hereditary, there’s enough intrigue and solid storytelling here for the film to find its fan base on home media. Again, Riley Keough does a fine job keeping things interesting and the child actors are very solid as well. The plot is usually pretty fascinating but it does fizzle out a bit during the “big reveal” towards the end. Regardless, The Lodge can still hang with its quality horror contemporaries and, over time, may even become something of an underrated gem. If Hereditary didn’t exist, our score would definitely be higher but, as it stands, The Lodge is still a good horror flick and worth seeking out.