It appears that we’re destined to do this forever. While Marvel continues to pop out an entire universe full of comic book movies, studios and filmmakers keep searching for new characters and stories to adapt to the big screen. Comic book antiheroes and vigilantes from titles like The Crow, Sin City, and Spawn have been scattered across film releases over the years. Yet, it’s safe to wonder if maybe the charade is just about over. This time, viewers get a graphic novel adaptation on the small screen as Jonas Åkerlund’s new film, Polar, landed on Netflix this past weekend.

Polar is a feature film version of a webcomic of the same name. Created by Victor Santos, the comic features no text and boasts an improvisational style with only a few pages being released at a time. Santos has stated that films like Le Samouraï, Tokyo Drifter, and Point Blank were inspirations on the comic. There’s also some very obvious inspiration coming from Frank Miller’s Sin City series judging by Polar‘s action/noir storytelling, usage of color, and minimalist style. Beginning in 2013, Dark Horse Comics began releasing graphic novel versions of each of the comic’s “seasons” with added speech bubbles and some extra content.

The Netflix film begins with a colorful cast of characters killing recently retired hitman, Michael Green (Johnny Knoxville), as he engages in sex and drug use at his mansion. Mr. Blut (Matt Lucas) and his company, Damocles, are required to pay out full pensions to their hitmen once they hit the age of 50. However, if they die before turning 50, the money reverts back to Damocles and the company receives a profit. Two weeks away from his 50th birthday, Duncan Vizla AKA the Black Kaiser (Mads Mikkelsen) intends to retire outside of a small, isolated town. Though, he’s contacted by Vivian (Katheryn Winnick) who offers him a final contract killing for an additional $2 million. Duncan successfully eliminates his target but also discovers that, in fact, he was the real target. From here, Duncan must fight his way through Blut’s assassins to survive until his 50th birthday. In addition, he meets a timid young woman named Camille (Vanessa Hudgens) who he takes a liking to. 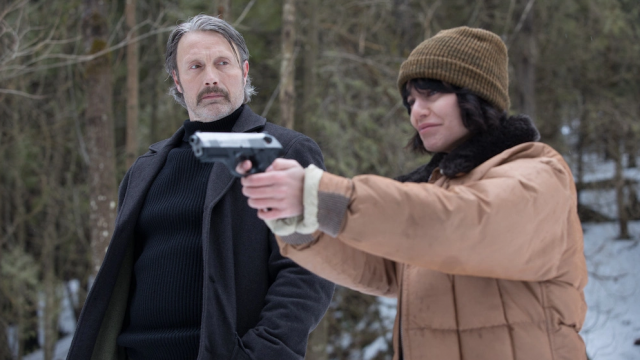 Firstly, let’s address the good things about the film as there are few. Mads Mikkelsen is great in the lead role as Duncan. Mikkelsen is an underrated talent in general but has proven capable to carry films with his emotionally stark performances. Mikkelsen’s role in Nicolas Winding Refn’s Valhalla Rising comes to mind when watching his portrayal of Duncan in Polar. Vanessa Hudgens also turns in a decent performance as Camille. Though, the story doesn’t make her feel overly important early on. When the film embraces its noir style, the action sequences and visuals are actually done quite well. Mikkelsen’s assassin has some truly fierce moments that feel like something out of the aforementioned Sin City.

Unfortunately, that’s where the praise ends as Polar is a strange film in general. On one hand, it’s a gritty revenge tale that’s something like Taxi Driver meets John Wick. Then, on the other hand, it’s absolute insanity with its psychotic cast of characters, over-the-top violence, and grindhouse style exploitation. The problem is that, other than some decent bouts of violence, the film doesn’t succeed at these things. Outside of Duncan, Camille, and, occasionally, Vivian, the characters are straight garbage. The worst offenders are Ruby O. Fee’s Sindy and Matt Lucas’s Blut. Sindy is the eye candy of Blut’s hitmen as she seduces the group’s targets for an easy kill. For some reason, though, she tends to go all the way with them before the group ever even attempts to vanquish the target. It’s nonsensical, unnecessary, and flat out ridiculous to watch.

Lucas as Blut is just plain bad. His character’s motivation to kill Duncan is absolutely awful. He puts a hit out on him to secure Duncan’s pension money which is understandable. After failing to kill him, Blut develops some kind of vendetta that Vivian continuously tells him to drop. Yet, he keeps pursuing Duncan as his top assassins and army of henchmen are easily killed off. At one point, he calls their issue “personal” which makes absolutely no sense as he’s only out for the money. He makes the issue personal for Duncan but has no reason to believe that it’s personal for himself. Blut is a poorly written character who you want to see die based on how annoyingly stupid he is as opposed to being a good villain. 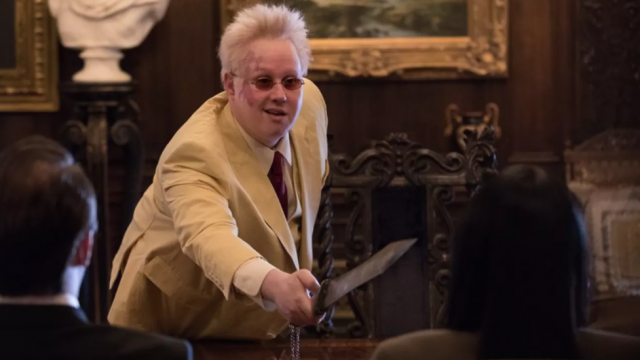 When the film decides that it’s doing something too well, it dips back into the previously mentioned grindhouse style. After a solid action or character building scene with Duncan, Polar can’t help but degenerate into some pointless cartoonish violence or something overly sexual. In cinema, the niche exploitation genre can work wonders but, in this case, it kills the film. Many of the scenes are so poorly written and seem like something out of the mind of a teenage boy. Women are grossly objectified throughout the course of the film with no redeeming factors. In a film like Sin City, there’s a sense of objectification. Yet, the women in those films have strong character arcs as they exact their revenge on those who have wronged them. None of that is present in Polar. This is the type of film people will look at in 2019 when they need an argument for how badly women can be portrayed in cinema.

The sad start to 2019 continues with Polar. Despite landing the same 2 out of 5 rating as Replicas, this is a far worse film. Only Mads Mikkelsen is able to compensate for how awfully written it is. When Polar is being a serious action/noir film, Mikkelsen actually makes it quite engaging. Additionally, he’s the sole reason that it outscores M. Night Shyamalan’s Glass. Mikkelsen can only do so much though. The rest of the film is a colossal trainwreck that’s disgusting to watch at times. Poorly written and acted, Polar is a step back not only for comic book movies but for cinema in general with its misogynistic ideals, appalling characters, and horrendous storytelling.