There’s something about musical performance that just feels so cinematic. Films like The Doors, Crazy Heart, and Inside Llewyn Davis have received rave reviews in the past and even gained award recognition. The dedication and emotion that comes with playing music matches up perfectly with the art of filmmaking. Writer/director Joseph McGovern recognizes this in his debut short film, All Over Again, and spotlights a wonderful musical performance as its climax.

The film sees Joseph Fuoco as Greg, an aging guitarist who gives up his passion. Greg frequently visits the Bus Stop Music Cafe on open mic night. As he watches a handful of others spout poetry and play other instruments, he starts to pick up his guitar once again. Through a series of flashbacks, we learn the reasons why Greg stopped playing in the first place. After all these years, and with the support of his wife and son, played by Constance Reshey and Mahdi Shaji respectively, Greg works his way up to a return performance at the cafe.

The story of All Over Again is very simple and relatable at its core. As people age, they often must sacrifice their own wants and dreams. We all have given up something we love because of family, jobs, or any number of other things. Though, that passion still remains. This is what makes McGovern’s film tick. We see Greg as he fumbles around on the guitar and is disappointed with himself as the film opens. However, by the film’s end, his passion is reignited and we see elation. Again, these are very simple ideas that everyone can understand. 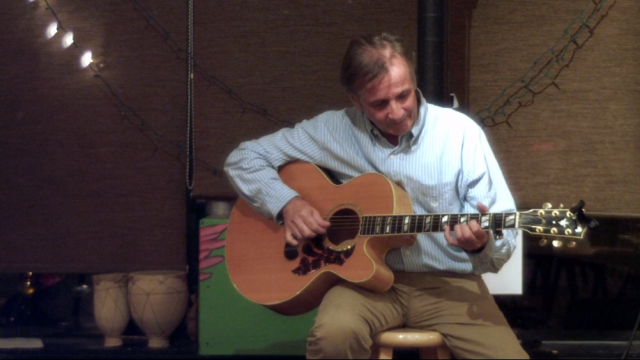 The highlight of All Over Again is definitely its final moments with Greg playing in front of an audience. After spending so much time listening to the other patrons of the Bus Stop Music Cafe, Greg finally takes his chance. The song, whose music was written by Fuoco and lyrics from McGovern, is a folky tune that perfectly encapsulates the theme of the film. Fuoco’s performance is also excellent and fits with his character. He performs the song proudly and confidently in front of the audience and it legitimately feels like an important moment in Greg’s life as well as in the film.

Unfortunately, the film is hampered by a few things though. Firstly, the editing is questionable at times. For the most part, it does its job relatively well. However, there are times when McGovern is almost trying to show viewers too much. There are some unnecessary cutaway shots to various people at the cafe during conversations and/or performances. This is especially the case since Greg is our main character and not the other patrons. There are also times where there are simply too many shots being used. All of them look great but the scenes could have a little more time to breathe with some more relaxed editing. 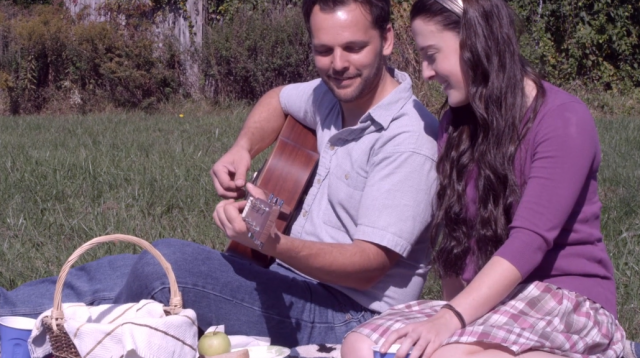 The biggest problem with All Over Again, though, is that it’s a little drawn out. The most interesting part about the film is Greg’s rekindling talent. We constantly see flashbacks of a young Greg (Eric Johnston) and his wife (Aubrie Babb) and, frankly, it doesn’t feel necessary. Yes, it does show why Greg put down his guitar but it’s uncertain if we really need all of that information. The film would probably be just as effective with Greg as a struggling songwriter who overcomes the issue. The other characters aren’t nearly as engaging as Fuoco’s Greg and the film tends to focus on them too often. Also, Mahdi Shaji as Greg’s son gives a wooden performance that definitely sticks out among a pretty decent surrounding cast overall.

In the end, All Over Again is a nice little short film. It features a likable main character and a simple agenda that gets you involved. While it’s a bit long with its 17+ minute runtime, Greg’s ending performance is well worth sticking around for. Being Joseph McGovern’s debut, there’s room for improvement but there’s definitely a lot to work with too. The film looks great overall and its relatable plot gives it a genuine appeal. If you’re a fan of music in film, All Over Again is worth a watch.