How things have changed in the span of a mere two months. On this site, we heaped loads of praise on the granddaddy of all Marvel films, Avengers: Infinity War. While it wasn’t perfect, it was the best experience of all things Marvel. Given its massive cast and plethora of moving parts, it balanced everything quite well and we deemed it the best film in the Marvel Cinematic Universe to date. Now, a little over two months later, it’s time to discuss a much lesser film in Peyton Reed’s Ant-Man and the Wasp.

The first Ant-Man, also ultimately directed by Reed, went through some serious issues before its release. Originally, Edgar Wright was set to write and direct the film. Due to creative differences, Wright and Marvel decided to cut ties with Wright still receiving story and screenplay credit with Joe Cornish. Adam McKay and star Paul Rudd did rewrites of the script that tied the story of Ant-Man more into the MCU than Wright’s version. Though, the general framework remained from Wright’s script. Despite the change, Ant-Man still made its July 2015 release date and was a hit at the box office. Rudd’s Scott Lang/Ant-Man appeared once again in Captain America: Civil War on the side of its namesake hero and the events of Ant-Man and the Wasp pick up two years later.

Stuck on house arrest following the airport battle from Civil War due to violating the Sokovia Accords, Scott Lang intends to keep his nose clean for the sake of his daughter, Cassie (Abby Ryder Fortson). While now on good terms with his ex-wife, Maggie (Judy Greer), and her new husband, Paxton (Bobby Cannavale), Scott is at odds with Hank Pym (Michael Douglas) and Hank’s daughter, Hope van Dyne (Evangeline Lilly). Scott receives a message during a dream from Hank’s wife, Janet (Michelle Pfeiffer), who’s believed to be dead after going subatomic and being lost to the quantum realm. Hank and Hope kidnap Scott and plan to use a tunnel to travel to the quantum realm to retrieve Janet. Hope buys black market technology from Sonny Burch (Walton Goggins) to finish building the stable tunnel. Though, their meeting is crashed by the mysterious Ghost (Hannah John-Kamen) who’s able to disappear and move through objects seemingly at will. 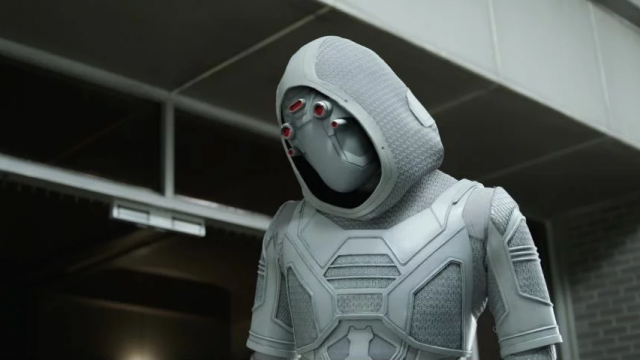 As you may be able to guess from the plot, the film doesn’t really read much like a superhero movie. In a way, it isn’t most of the time. When you break it down to its core, Ant-Man and the Wasp is basically a botched heist movie. It’s all about characters trying to steal things from other characters and screwing it up. Hope and Sonny have an altercation about the tech so she attacks him as Wasp. Ghost shows up to steal the tech for herself. Sonny tries to steal Hank’s shrunken lab. Then Ghost tries to steal the lab. It’s constantly a back and forth chase between the characters that ultimately doesn’t mean that much in the end. It’s one of those instances where maybe a simple conversation between all parties could’ve benefited everyone.

One of the biggest problems with the film is that there doesn’t seem to be any real consequence here. The main goal for the heroes is to find Janet. Though, the filmmakers must’ve decided that that isn’t enough to go on and there needs to be a villain. However, Ghost isn’t really much of a villain either. She’s just a desperate person in a bad situation. Oddly enough, this film has less identity than its predecessor and that film suffered from losing its director and main creative force. Gone are the amusing action scenes like Ant-Man fighting Yellowjacket on a toy train track. Instead, there are just a bunch of people chasing each other for two hours. 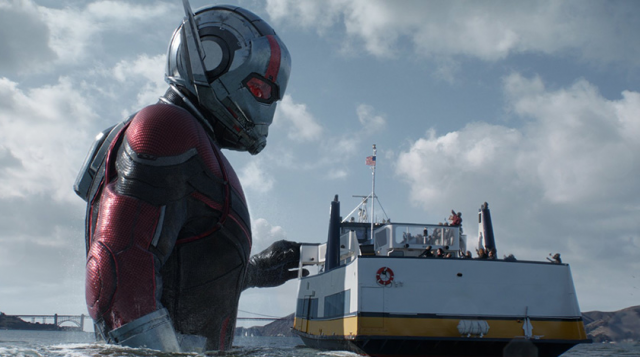 Of course, the film isn’t all bad. It’s Marvel so it’s watchable if nothing else. The characters are pretty good overall and there are still laughs to be had. Unfortunately, Paul Rudd takes a serious (and quite literal at times) backseat in this film to allow Evangeline Lilly and Michael Douglas to shine. Nothing against Lilly or Douglas but Rudd should definitely be the focus as he’s the main title character. It feels like Rudd’s Scott Lang is just along for the ride. That being said, Wasp is pretty awesome and Evangeline Lilly does a fine job in the role. Michael Douglas is a highlight of the film as well and is essentially the focus in a lot of ways.

Being released after Infinity War probably wasn’t the best spot for Ant-Man and the Wasp to be in. This felt like an obligatory way to address how Rudd’s Ant-Man fits into the Infinity War story. The film doesn’t really do much of that either though. After the epic conclusion of that film, Marvel should’ve given the MCU some time to breathe and waited until next year’s Captain Marvel instead of cranking out this film so fast. This isn’t a bad film by any stretch of the word but there’s just no real character to it. It has a fraction of the wit and charm of the first movie which is enough to keep you interested. Ultimately, though, Ant-Man and the Wasp is largely forgettable and isn’t a necessary step to point fans in the direction of the next Avengers film.