It’s always surprising what a filmmaker can do in a limited runtime. We’ve covered many brief, micro, bite-sized, or whatever else you’d like to call them short films on this site. Generally clocking in at about five minutes or less, it’s amazing how well told, acted, and generally executed these shorts often are. Despite pushing six minutes with its lengthier end credits, Vincenzo Nappi’s most recent horror short, First Bite, impresses for the exact reasons mentioned. Horror, and specifically B-movie fans, should be delighted by the film’s quality even if its story feels maybe a tad too familiar.

The film centers on a young woman named Alex (Catherine Saindon) who finds herself holing up in a venue restroom during a heavy metal concert. Crippled by an insatiable hunger but also unable to keep anything down, Alex continuously vomits into the toilet. Her concerned friend, Olivia (Hana Kashaf), tries to aid Alex but to no avail. Eventually, Alex understands what she must do to finally curb her appetite.

First Bite is reminiscent of many of the horror shorts we’ve covered on this site such as The Knock, Bill, and Under the Bed. It’s a familiar kind of tale but it’s done with style. The film’s B-movie horror aesthetic is perfect for this type of story with its simple but gory special effects, grainy film quality, and unconventional setting. By planting the film within the heavy metal community with music provided by the Canadian hardcore band, Femur, Nappi gives First Bite a sort of niche underground feel that will please some while distressing others. Though some may not enjoy what Nappi is going for with his film, we certainly don’t fall into that group. Frankly, First Bite is just a well made and abrasively cool short horror film. 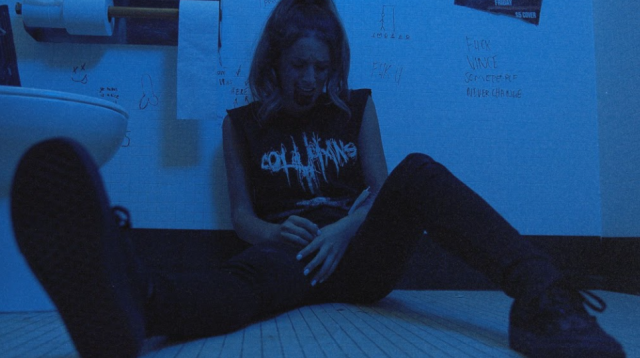 Nappi’s influences are many in regards to First Bite but he doesn’t necessarily rip anything off while carrying out his vision either. Nappi himself cites films like Blue My Mind, Raw, and The Neon Demon among his influences for this film. While there are certainly some similarities or maybe more like borrowed themes from these films, your mind doesn’t immediately go to them as obvious inspiration. The only film that may pop into your mind while watching First Bite is Jeremy Saulnier’s Green Room. However, it’s not a blatant copy of Saulnier’s film and mainly feels similar because of its threats of violence and the concert venue setting. For all of the cinematic influences that Nappi points out, First Bite does feel like a separate entity for a filmmaker that clearly understands and loves the horror genre.

That being said, the film does feel somewhat unoriginal for different reasons. Of course, all reviews are spoiler free so we can’t go too in depth here but First Bite basically delivers what you’d expect out of a film like this. It’s similar to the recently reviewed Amaranthine in that viewers should kind of know what to expect from it from the very moment it begins. This isn’t a damning issue by any means because, as previously mentioned, First Bite is a cool little horror film in its own right. Yet, it may leave viewers wanting a bit and wishing for something more original to happen. There’s a unique artistic vision with the film but the overall story has become mostly horror cliché at this point and feels far too familiar and even anticipated. Again, this isn’t a backbreaking problem given the overall quality of the film itself but it does keep First Bite from being something truly special.

Regardless, First Bite still comes recommended especially for horror and B-movie fans. If you’re a metalhead, even better. The film has attitude which sets itself apart from other more run-of-the-mill types of horror shorts. However, we keep coming back to the familiar story which drags the film down a bit. Perhaps it’s unfair to judge First Bite so harshly because, honestly, the story is fine. It’s not poorly executed, shoddily told, or even badly acted. In fact, Nappi does a great job relaying the story and the lead performance from Catherine Saindon is very good. It’s just a story that the majority of horror fans have seen before and, probably, more than once. Despite its slight unoriginality though, First Bite is still a lot of fun and worth a watch for any horror fan.