Anxiety is one of the most common mental disorders not only across the United States but the entire world. In the US alone, statistics claim that nearly 40 million people suffer from some form of anxiety. Things like phobias, obsessive-compulsive disorder, and post-traumatic stress disorder all fall under this banner. Of course, such a relatable topic has been addressed on film numerous times. Titles like The Aviator, The King’s Speech, and Room have each tackled different aspects of anxiety to much acclaim. Writer/director Chris Esper focuses on another anxiety disorder, known as the imposter syndrome, in his newest short film aptly titled Imposter.

The imposter syndrome, a term first used in 1978, describes feelings of doubt, inadequacy, and/or incompetence. Success is often attributed to luck or fraud as opposed to skill. Esper’s film opens with a businessman, Mike (Tom Mariano), as he’s tormented by a young boy in a jester costume (Brendan Meehan). The jester shadows Mike as he attends a work meeting in which he’s unable to contribute his thoughts due to the jester’s presence. As Mike gets onto a bus, the story passes to a female artist (Sheetal Kelkar). Like Mike, the artist has her own counterpart in a nude woman covered by a canvas (Jamie Braddy). The artist features her work at an art gallery but noticeably feels exposed as she’s stared down by her counterpart. Back on the bus, other passengers are shown all with their own counterparts haunting them in various ways. 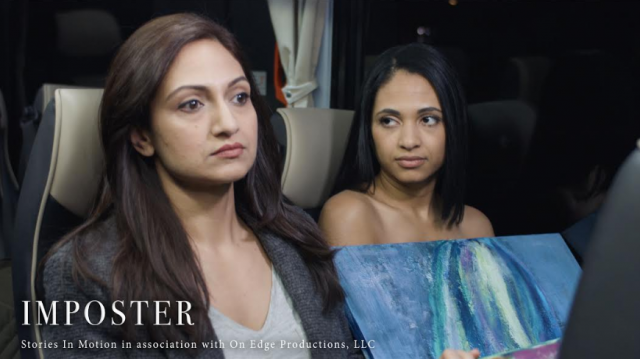 Technically speaking, Imposter is an impressive film in many ways. It’s mostly silent with only a few lines of dialogue spoken during Mike’s work meeting. The rest of the film’s sound is occupied by original music from Steven Lanning-Cafaro. The music is somber yet beautiful and works to accentuate the film’s message (more on that shortly). The cinematography from Richard King is superb and lives up to other wonderfully shot shorts reviewed on this site like Saudade, Slapface, and Here Lies Joe. While the locations in the film are somewhat generic, the cinematography and camerawork makes them interesting. Shots never linger or feel exhausted as there are always new visual wrinkles being added to the story.

Upon an initial viewing, viewers may find themselves questioning the significance of the counterparts if they’re not aware of the imposter syndrome. Though, Esper does an excellent job at starting the film off somewhat vague and narrowing the scope by the film’s climax. Even if you’re not familiar with the troubles of the syndrome and/or anxiety in general, the pieces quickly come together as you see more characters and their respective counterparts. The characters cannot see the others’ counterparts which also adds a level of intrigue and realism. For people that suffer from such disorders, they may not know that many others around them are in the same boat. As the statistics show, feelings of anxiety are not limited to the few and Esper’s film points this out in a subtle and effective way. 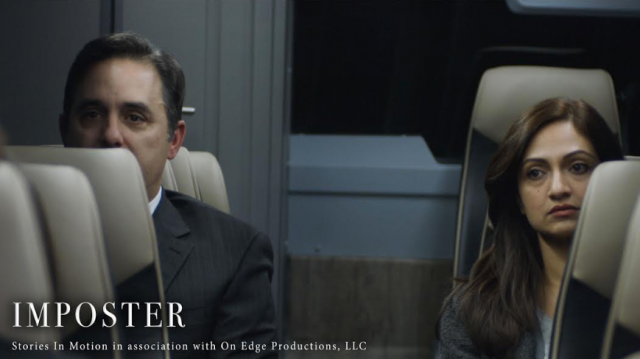 While the film certainly has the imposter syndrome at the forefront, there’s an additional interpretation here that may have been intentional or, perhaps, coincidental. Obviously, the counterparts are a representation of the personal fears and inadequacies of the characters. Though, they could potentially represent what the characters had striven to be. For example, maybe the character of Mike had never intended to become a businessman. Now, he’s haunted by a sort of specter in the jester/comedian. A military veteran with a missing limb (William DeCoff) is shadowed by a younger counterpart with both arms (Adam Masnyk) in full military garb. He certainly appears to be more decorated and a sort of antithesis to DeCoff’s veteran. The film’s climax provides solace as it allows the characters to abandon their self doubt and fully embrace reality. It’s as if the real characters are the imposters to their younger selves and must be freed of the weight. There are definitely parallels between the interpretations but there’s also a potential double meaning at play also.

Regardless of the interpretation, Imposter is top notch. The film is well made with great cinematography, camerawork, and music. The acting is good across the board and every character is there to enhance the overall story. In its less than ten minute runtime, the film is captivating and keeps you thinking throughout. Its message, and potential double meaning, will have you going for repeat viewings to look for subtle nuances and intentions. With Imposter, Chris Esper has created a captivating short film experience where fear and self doubt can be crippling. Yet, it also boasts the message that people suffering from any form of anxiety should not let such things prevail.

Check out the trailer for Imposter below.

“Imposter” | Short Film Trailer (2018) from Stories in Motion on Vimeo.