When it comes to technology, it truly is a wild time we live in. No longer do independent filmmakers have to worry about lack of decent equipment or a limited budget. Sure, larger scale productions and effects-driven stories do require more time, money, and resources. Ultimately though, there’s not much holding filmmakers back from making a great looking film in this day and age. Such is the case with Fazeel AJ’s mind-bending and deliberately paced debut short film, Trapped.

The film centers on a young man (Dhanushand) who snaps awake as he’s listening to his headphones while sleeping in a chair. He gets up to find his keys mysteriously lying on the ground before heading back to his room which is in complete disarray. After the man decides to do drugs, he starts reliving previous events. Unfortunately for him, this loop he finds himself trapped in appears to show no signs of stopping.

Trapped is another simple and effective quality short. Like the recently reviewed Bill, the film takes place in one location and has an uncomplicated story. That being said, the story itself is something that viewers will be able to interpret how they’d like. As the man is stuck in his routine of drug use and subsequent confusion, you find yourself questioning why he’s caught in this loop and what it actually means. Is it just the throes of addiction where every day is exactly the same or is there something more damning behind it? Again, this is something that viewers will have to interpret for themselves as it’s left open-ended. 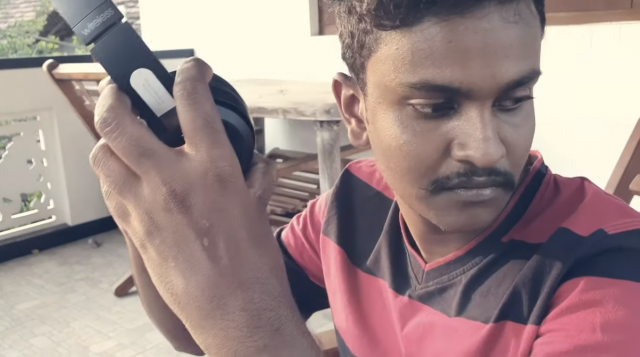 The simple and effective story approach also carries over to the technical side of things as well. The film is made with a skeleton crew of writer/director Fazeel AJ, director of photography Afraz, editor Rehan, and the star, Dhanushand. Judging by the slick production, you’d definitely think more people were involved. Similarly to Steven Soderbergh’s 2018 feature, Unsane, Trapped is shot entirely with a cell phone. The visuals all look great with sharp images, fluid camerawork, and drug-addled special effects. Nowadays, indie filmmakers don’t have to worry about bulky cameras or the complications of working with film to realize their vision. Even a simple cell phone can get the job done in impressive fashion. On top of everything, sole cast member, Dhanushand, puts in a solid perfomance fleshing out a character through action and without any dialogue.

If there’s any negative to Trapped, it’s in the film’s pacing. It’s a very deliberately paced film that maybe lingers just a tad too much. At just shy of eight minutes in length, Trapped feels slightly longer as it takes a minute to get the story going. It also drags a little during the drug use segment. Some quicker action or editing would help to speed up these moments just a little and tighten up the overall film. However, this is kind of the risk you run by having one cast member and no dialogue in a film. These certainly aren’t backbreaking issues by any means though.

Overall, Trapped is a very good short film. The simple approach gives it an identity while the look and feel of the film give it a professional quality. The musical choices help to offset some of the more lingering moments and keep viewers entertained throughout. However, the best thing about Trapped is that so much of it is left open to interpretation. It’s a fun film to sit and ponder over or discuss with others. Are the man’s experiences all the result of some drug-fueled haze or is there something more sinister afoot? That’s up for the viewer to decide for themselves. For fans of short cinema or mind-bending, drugged out films like Trainspotting and Requiem for a Dream, give Trapped a shot.