Let’s face it. In 2017, Disney rules the world. They’re one of the most recognizable companies with multiple theme park and a historic library of classic films. Their name has been stamped on nearly everything imaginable at this point. Not to mention, they acquired two unbelievably successful properties in Marvel Entertainment and LucasFilm. However, before superheroes and jedis, Disney was quite lax in terms of epic adventures on the big screen. That is, until the birth of the Pirates of the Caribbean franchise.

To date, Pirates of the Caribbean has raked in over $3.7 billion worldwide and it stands to trump the $4 billion mark this coming weekend when the fifth installment, Dead Men Tell No Tales is released in theaters. Each of the four released films have earned at least $600 million at the box office and it’s the first series in history to have multiple films earn over $1 billion in revenue.

Surprisingly, the idea for Pirates of the Caribbean stems from the Disney theme park ride of the same name. The original attraction opened at Disneyland in Anaheim, California in 1967. It was the final construction overseen by Walt Disney himself before his death three months prior to the ride’s opening. Little did anyone know that the ride would spawn one of the most popular film series’ of all time. The original Pirates film was even almost canceled at one point too.

In the early 1990’s, screenwriters Ted Elliott and Terry Rossio were working on a supernatural pirate script. There had been little interest in the genre at that time and no studio picked up their screenplay. Later in 2001, Jay Wolpert was brought in by Disney to write a script based on the popular ride. Producer Jerry Bruckheimer rejected Wolpert’s vanilla script and brought in Stuart Beattie before eventually hiring Elliott and Rossio to add their own flair to the project. 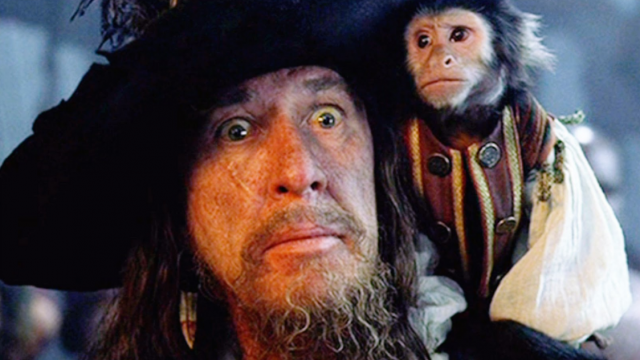 The result was 2003’s Pirates of the Caribbean: The Curse of the Black Pearl. Elliott and Rossio brought their supernatural element to the production as Captain Jack Sparrow (Johnny Depp) sought out the cursed pirate ship, The Black Pearl. The Pearl, being crewed by the damned and “captained by a man so evil that Hell itself spat him back out,” met its fate after the crew claimed cursed Aztec treasure from the Isla de Muerta. Following the emergence of the final gold coin that the pirates must return to break the curse, The Black Pearl arrives in Port Royal and takes the governor’s daughter, Elizabeth Swann (Keira Knightley), hostage. Her childhood friend, Will Turner (Orlando Bloom), teams up with Sparrow, who formerly captained the Pearl before a mutiny led by his first mate, Captain Barbossa (Geoffrey Rush), to save Elizabeth and retrieve the ship.

The Curse of the Black Pearl was a smash hit as the fourth highest grossing film of 2003. Director Gore Verbinski jam packed the film full of beautiful scenery and dazzling special effects. Meanwhile, Johnny Depp led a stellar cast of lovable, yet untrustworthy, characters. Even Geoffrey Rush’s Barbossa is ridiculously likable despite being the film’s villain. The film also boasted an unbelievably catchy score. Though, similar ideas had previously been used in Ridley Scott’s Gladiator. While Hans Zimmer composed the score for Gladiator, his frequent collaborator, Klaus Badelt, handled duties on The Curse of the Black Pearl. Ultimately, both men contributed to the soundtrack with Zimmer even taking on composing duties for the sequels. Even though it was expected to flop, the film was full of swashbuckling fun and it was inevitable that sequels would follow.

Sequels were certainly what we got. The next two installments of the series were shot back to back similarly to The Matrix Reloaded and The Matrix Revolutions a few years prior. 2006’s Pirates of the Caribbean: Dead Man’s Chest continued the fun of the first film while also expanding the cinematic world. In this sequel, Will and Elizabeth’s wedding is interrupted by Lord Cutler Beckett (Tom Hollander) of the East India Trading Company. Beckett tasks Will with recovering Jack Sparrow’s special compass to locate the Dead Man’s Chest. The chest holds the heart of Davy Jones (Bill Nighy) whose job is to ferry souls to the next world. Though, Jones neglects his duty and is, in turn, cursed along with his undead crew. 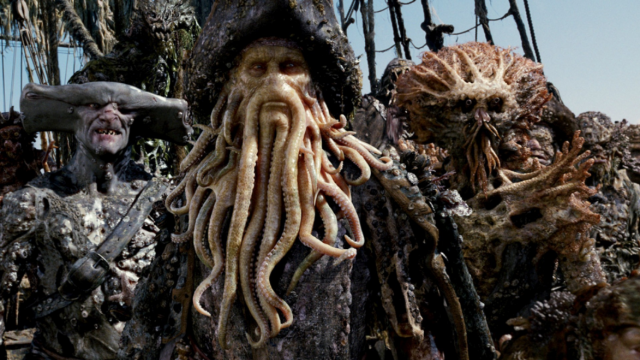 As previously stated, Dead Man’s Chest continues much of the fun from the first film. Though, the story isn’t quite as tight as its predecessor. It’s not really a standalone film. It’s a transitional one. Instead of being a new adventure, it sets up events that are fully fleshed out in the next film. While Dead Man’s Chest isn’t perfect with its nonsensical cannibal storyline, exaggerated action, annoying characters (more on that soon), and cliffhanger ending, it’s still a worthy installment to the series. Davy Jones is a formidable foe and his “pet,” the Kraken, is a hellish monster that makes you fear for Sparrow and company. Regardless of its standing among fans, it remains the highest grossing film of the series. Also, its cliffhanger is one of the best ever and will leave you with goosebumps.

Pirates of the Caribbean: At World’s End was released the following year to mixed reviews. Everyone’s favorite characters returned for one final epic pirate battle. Jack Sparrow met his demise at the hands of the Kraken and ended up in the purgatorial Davy Jones’ Locker. The newly resurrected Captain Barbossa, along with Will, Elizabeth, and the rest of Sparrow’s crew steal a map from the pirate lord of Singapore, Sao Feng (Chow Yun-Fat). The map gives insight on how to sail to the edge of the world to retrieve Sparrow from the Locker. After Sparrow’s retrieval, the nine pirate lords convene at Shipwreck Cove. Here, they decide how to battle the tandem of Jones and Beckett. Beckett is able to control Jones following his acquisition of Jones’ heart. 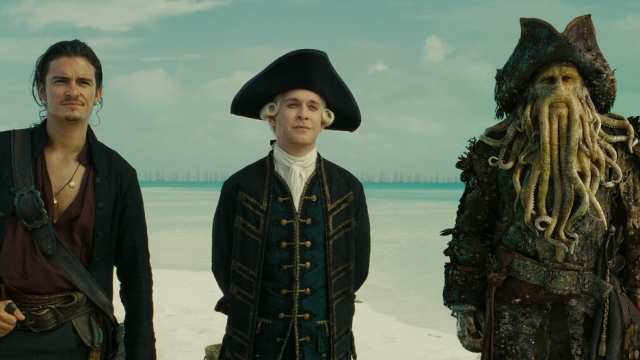 At World’s End features constant flip-flopping of alliances as the characters all have their own interests at hand. It’s actually quite entertaining how they all use one another as leverage. Though, their motivations can become quite convoluted at times too. The most maddening aspect of the film is the character of Calypso. Calypso AKA Tia Dalma (Naomie Harris) is a sea goddess who was in love with Davy Jones at one point and is responsible for his sinister turn. Barbossa plans to release her from her earthly bonds (i.e. Tia Dalma) to use against Jones. Ultimately, her storyline goes absolutely nowhere other than creating a maelstrom for The Black Pearl and The Flying Dutchman to battle in. It’s too bad as Tia Dalma was a unique and entertaining character but never got her due.

While At World’s End is flawed, it still maintains that feel of a Pirates of the Caribbean film. It’s just fun to watch and beautiful to look at. The inclusion of the nine pirate lords was a neat idea that faltered a little due to none of them really doing much of anything. It was also great to see Keith Richards of The Rolling Stones make a cameo as Captain Teague/Jack Sparrow’s father. While the film brought a reasonable conclusion to the trilogy, of course, it left room for a potential sequel. Though, one wouldn’t come until four years later.

Pirates of the Caribbean: On Stranger Tides released in 2011 and brought back the standalone feel of the first film in the series. Johnny Depp and Geoffrey Rush reprise their roles as Sparrow and Barbossa respectively. Kevin McNally and Keith Richards were the only other notable returns as Sparrow’s first mate, Joshamee Gibbs, and Captain Teague. In the film, Sparrow encounters Angelica (Penelope Cruz), a woman from his past who’s searching for the Fountain of Youth. Her father, the infamous real-life pirate, Blackbeard (Ian McShane) wants to use the Fountain to lengthen his threatened life. Along the way, they must recover chalices once owned by Ponce de Leon and capture a mermaid who can provide a tear to add to the water from the Fountain. 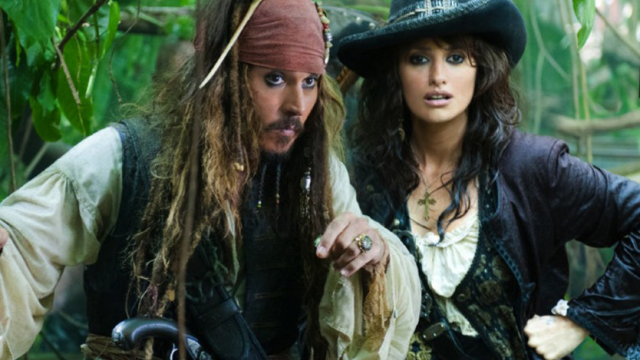 Director Gore Verbinski didn’t return for On Stranger Tides so directorial duties were handled by Rob Marshall. The story wasn’t necessarily an original work as longtime screenwriters Elliott and Rossio wrote the story based on the 1987 Tim Powers novel, On Stranger Tides. Elliott and Rossio’s version was simply adapted to fit into the Pirates universe. This film was met with mixed reviews as well. It’s an odd sequel as it doesn’t focus as much on the characters despite so many of them being new. It’s more about the “stuff” that’s happening even though there’s not much weight to the story. After how high the stakes became in the original trilogy, On Stranger Tides never quite meets expectations. However, it was the second installment to break the billion dollar mark. Yet, it’s also credited as the most expensive movie ever made.

In a few days, Pirates of the Caribbean: Dead Men Tell No Tales will release in theaters worldwide. There’s no doubt that anticipation is through the roof. Regardless of all the mixed reviews the franchise has received, it’s still one of the most beloved. The characters, special effects, locations, music, and everything in between are unforgettable. The fifth entry in the series looks to continue the trend. Jack Sparrow and Barbossa return once again as does Orlando Bloom as Will Turner. Javier Bardem will play a new villain, Captain Salazar. Another undead enemy, Salazar is not a pirate. He’s actually a pirate hunter who seeks to find Jack Sparrow (who else?). The trailers have looked excellent up to the film’s release and it feels like a Pirates sequel.

As of now, it’s hard to say if the series will continue beyond Dead Men Tell No Tales. The trailers claim that it’s the final adventure but, like Dead Man’s Chest and At World’s End, it could be the first part of the final adventure. Regardless, it has been fourteen years since the release of The Curse of the Black Pearl and the series is still going strong. Coming off of a billion dollar gross of an average movie, Dead Men Tell No Tales will no doubt be a hit. For many, though, if this is the end of Jack Sparrow’s swashbuckling exploits, we’re all hoping that Disney saved the best for last for Pirates of the Caribbean.