In today’s society, the world of vampires has become something of a joke thanks to the popularity of franchises like The Twilight Saga and True Blood. Many seem to forget that vampires were once taken seriously. Bela Lugosi had one of the most memorable performances of all time in 1931’s Dracula. 1987 saw cult classic, The Lost Boys, garner positive reviews. The early 1990’s gave us two more serious takes on vampires with Francis Ford Coppola’s delightfully inconsistent version of Bram Stoker’s Dracula and Neil Jordan’s Interview with the Vampire. In between the two extremes of the folkloric creatures lies the Underworld series.

Since their inception, the Underworld films have mostly flown under the radar in terms of the general public. It seems that even Blade is more commonly thought of when talking vampire films. However, despite the generally negative critical reviews, Underworld has developed something of a cult following. Thus far, there have been four films in the series with a fifth scheduled for release this Friday. All of them are heavily stylized action films that rely on gunplay, monsters, and gore to tantalize fans.

The original film was released in 2003. It was created by Danny McBride, Kevin Grievoux, and Len Wiseman with the former and latter serving as screenwriter and director respectively. Grievoux acted in the film as a secondary character named Raze. Kate Beckinsale stars as Selene, a Death Dealer. Death Dealers are vampires that track down and kill Lycans. The term “Lycan” stems from “lycanthrope,” meaning werewolf. As the film continues, Selene meets Michael Corvin (Scott Speedman). Corvin is a human being hunted by the Lycans, led by Lucian (Michael Sheen), because he’s able to become a hybrid of Lycan and vampire due to his bloodline. Meanwhile, Selene wakes a vampire elder named Viktor (Bill Nighy) in an attempt to convince her coven that the Lycans have returned. 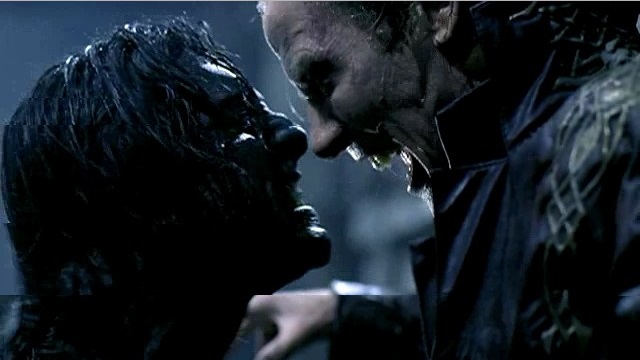 Unfortunately, Underworld was met with a bit of controversy upon its release. It was the subject of seventeen counts of copyright infringement from White Wolf, Inc. and Nancy A. Collins. White Wolf claimed that the film was too similar to a number of their properties including role-playing games and novels they released. The lawsuit ended in a settlement. Nonetheless, Underworld raked in over $95 million worldwide which exceeded the estimated budget of $22 million.

The film came out only a few years after The Matrix and the influence is obvious. Both plots feature a bunch of outcasts in tight leather fighting against an enemy to see who can gain one person’s allegiance first. Michael Corvin is  basically this film’s Neo AKA “the one.” The action scenes are done relatively well as are the special effects. Specifically, the effects on the Lycans transforming into their primal selves is done especially well considering it being made in 2003. One of the biggest issues with the film, though, is in its failure to provide a cohesive story. All important events and plot lines are covered using monologues. The characters flat out tell the audience things as opposed to showing them. This is a shoddy storytelling mechanic that should be outlawed in all feature films.

2006 saw the release of a direct sequel to the first film entitled Underworld: Evolution. It remains consistent with its predecessor as Len Wiseman serves as director and Danny McBride as screenwriter once again. Evolution introduces a new antagonist with another vampire elder named Markus (Tony Curran). Markus was only talked about in the first film but is one of three sons (a vampire, a lycan, and a human) of Alexander Corvinus. Markus plans on releasing his Lycan brother, William, from his prison so they may rule together. Once again, main character, Selene, and Michael Corvin must stop their common enemy. 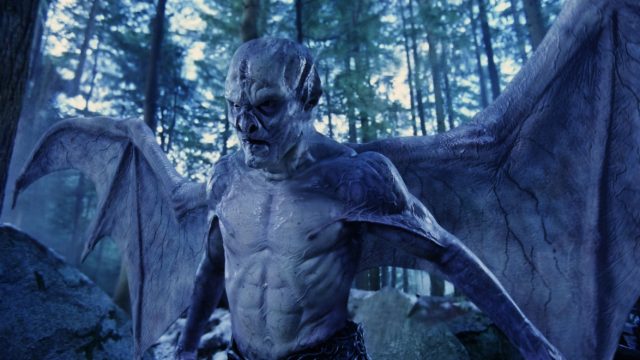 Markus’s plan is a bit jarring considering the fact that he’s a vampire elder. Sure, it’s understandable for him to have some kind of affection for his brother. Though, as the very first vampire, you’d assume that he would remain faithful to his coven. There’s really no explanation as to why Markus is only out for himself and the plot just doesn’t make that much sense overall. That being said, Underworld: Evolution is a relatively fun watch. As long as you’re not expecting too much, there are, again, some pretty solid action scenes and special effects. Markus acts as a formidable foe and the prospect of him and William coming together would seem to put multiple races in jeopardy.

Evolution performed about the same as the first film in the series. The budget was a bit higher but it also pulled in over $111 million in worldwide box office. As with the original, Evolution had an icy blue tone to it and it also had many of the same problems. The convoluted plot, excessive monologues, and lack of proper storytelling plague this film as well. As a sequel, it advances the story of the original and brings back multiple characters and ideas. However, Evolution may be a bit too much like the original to really separate itself.

As we saw before, critical acclaim isn’t exactly necessary to make another installment in a franchise. Thus, Underworld: Rise of the Lycans was conceived. Wiseman said that originally the series was planned as a trilogy with the third film being a prequel. This makes some sense considering that the characters from the first two films do mention the events from Rise of the Lycans frequently. Patrick Tatopoulos directed Rise of the Lycans with Wiseman taking on a producer role. McBride only co-wrote the screenplay this time around too. The prequel feels more in line with what the original film should’ve been. It’s a centuries-old tale of vampires versus an uprising of werewolves with the returning Lucian (Sheen) at the helm. 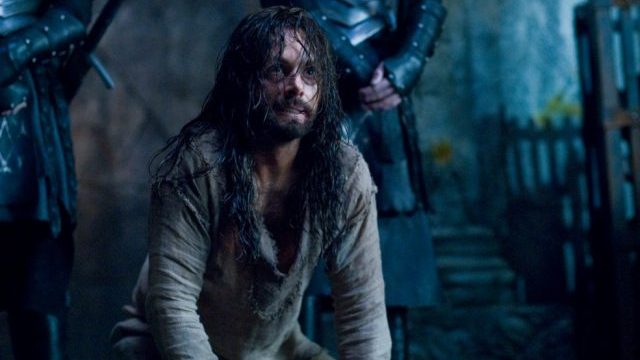 Lucian, the first human-born werewolf, is a slave to another alum from the original, Viktor (Nighy). He ends up falling in love with Viktor’s daughter, Sonja (Rhona Mitra). Of course, their love is forbidden and the catalyst for the rest of the events. Lucian intends to leave the vampire castle with Sonja but, after Viktor discovers their plans, subsequently pits himself and the Lycans against Viktor and the vampires.

While Rise of the Lycans isn’t perfect by any means, it does help to establish characters from the original film better. Again, this does truly feel like the first in the series. It’s somewhat bewildering why they didn’t just start with this idea and build off of it. It furthers Lucian’s motivation in the later time period of the original and establishes Viktor as a true villain. Most of this can be attributed to the performances by Michael Sheen and Bill Nighy. Sheen plays a sympathetic character in this film while he was mostly a villain in Underworld. Nighy is excellent as the heart-of-stone character, Viktor. In the other films, neither faction is really all that relatable. At least in Rise of the Lycans, you’re given a side that you’re supposed to root for. In a way, it puts into question the entire direction of the series.

Though it received slightly better (but not good) reviews than its predecessors, Rise of the Lycans had a major flaw that came with the ending. In the previous films, we were told what ultimately happened with Lucian but, for some reason, it isn’t seen here. There’s a climactic battle between vampires and Lycans and a showdown between Lucian and Viktor is imminent. However, their final fight with one another ends up being swept under the metaphorical rug as if nothing of consequence happened. There is a decided winner but, a few scenes later, the loser basically walks away perfectly fine. Without spoiling anything, it’s questionable that the filmmakers would choose the ending they did rather than go with the scenario that was explained in the previous movies.

Either way, two movies that were wrapped up somewhat nicely and a prequel chronicling historical events weren’t enough to keep Underworld away for too long. In 2012, we received Underworld: Awakening directed by Måns Mårlind and Björn Stein. When people talk about bad sequels ruining franchises, this is the type of film that they’re talking about. Kate Beckinsale is back as Selene and, this time, the threat isn’t from the Lycans (or is it?). Humans discover the presence of the two races and begin purges to take them all out. Selene is captured and cryogenically frozen. After she breaks out, she finds that she shares sight with a young girl named Eve (India Eisley) who’s another powerful hybrid. 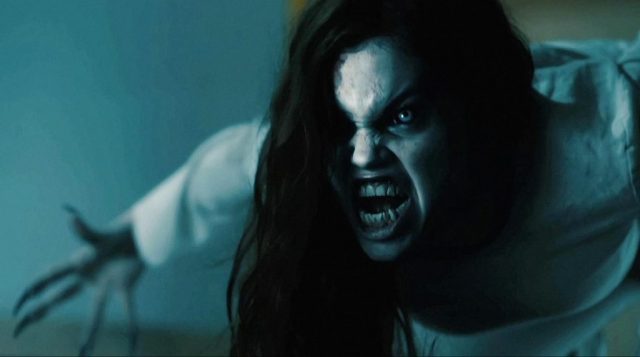 This is about all there is for a plot because nothing is ever explained. You’re barely even told any of the characters’ names. If anything, this film seems like a bridge into the next entry of the series. It certainly doesn’t have enough legs to stand on its own nor does it further any events of the previous films. Awakening seems like it’s a direct-to-DVD release with its ugly CGI special effects and nonexistent plot. It’s a shame because there’s some good talent in this sequel. Charles Dance, Stephen Rea, and Wes Bentley add star power but aren’t really given much to do in their limited screen time. Michael Ealy also has one of the larger roles as a detective but he’s just sort of there and it’s hard to figure out why.

Needless to say, Awakening received negative reviews. The best part about it is that it’s extremely short as the credits roll about 78 minutes into the runtime. Other than that, there’s really no need for it to exist. The little bit of plot that it does have probably could’ve been glossed over in about five minutes.

Now, with Underworld: Blood Wars coming out this week, it’s safe to wonder where the filmmakers will go with this sequel. It can’t be as bad as Awakening (hopefully) but will it do anything to actually warrant its own existence? Once again, Underworld returns to familiar territory as it’s strictly vampires versus Lycans in this new film. Not that it ever strayed too far from this formula in the past, but one would hope that this is the last go-round.

Unfortunately, though, it’s not. A sixth film has already been greenlit with Kate Beckinsale returning. This is absolutely mind-boggling. When will these movies end? Is there really a big enough fan base to continue pumping them out? The first few are moderately entertaining action films. There are some cool visuals, decent action, not much plot, but a lot of exposition. With the releases of Awakening and Blood Wars, the engine has to be running on fumes at this point. The future does not look bright for the Underworld series. Yet, for some reason, that’s not going to stop studios from force feeding sequels to audiences.

One Thought to “State of the Franchise: Underworld”