It appears that no one is safe here in 2019. It has been a horrible year for cinema overall with very few standout titles. For every Rocketman, there are five other films that absolutely fail at making any significant impact whatsoever. We’ve previously discussed Disney’s recent failures with films like Captain Marvel and Aladdin but now it seems that their troubles have trickled down to one of the most consistent studios in Pixar. While Disney and Pixar’s Toy Story 4 isn’t a necessarily bad film, it’s easily the most disposable of the legendary computer animated franchise.

In Cinema Smack’s recent State of the Franchise on the Toy Story films, we discussed the background, production, and reception to each of the previous three films in the series. Therefore, there won’t be too much time spent on that here. All viewers need to know is that 1995’s Toy Story was a smash hit that changed animation. The computer generated imagery used in that film has gone on to become the standard even for films outside of the Pixar banner. In addition, the Toy Story films have had a very human message despite the lead characters being toys. Each subsequent sequel ups the emotion and tugs at the heart strings more than you’d expect. Sadly, that’s exactly what Toy Story 4 is missing.

The film begins with a flashback to nine years ago in between the events of Toy Story 2 and 3. A young Andy (Jack McGraw) is seen with all of his old toys. Sheriff Woody (Tom Hanks), Buzz Lightyear (Tim Allen), and the rest of the gang embark on a rescue mission to retrieve RC from the gutter during a thunderstorm outside. After doing so, Andy’s sister, Molly’s, Bo Peep (Annie Potts) lamp is given away which explains Bo Peep’s absence in the previous film.

Fast forward to the present day and all of Andy’s old toys are now under the care of Bonnie (Madeleine McGraw). Bonnie does her best to play with all of her toys but, for whatever reason, Woody has fallen out of favor with her. He struggles to accept not being someone’s favorite toy and tries to embrace a supportive role instead. He stows away in Bonnie’s backpack for her kindergarten orientation where Bonnie literally makes a new toy. Forky (Tony Hale), a spork with googly eyes and pipe cleaner arms, comes to life and has an existential crisis when he’s unable to understand his new role as a toy as opposed to a disposable eating utensil. During Bonnie’s family’s road trip, Forky jumps out of the window of their RV to escape and Woody goes after him. This eventually leads the two to a traveling carnival where Woody reunites with Bo Peep. 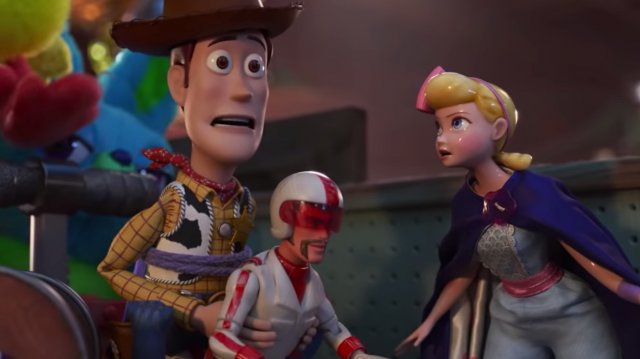 This isn’t even the whole story. There’s more going on as Woody and Forky come across another talking doll named Gabby Gabby (Christina Hendricks). She has a somewhat sinister side as she tries desperately to gain the affections of a child in an antique store. If you can’t tell already, the plot for Toy Story 4 is just a little too much overall. There are a lot of ideas thrown at the wall to see what sticks. For the most part, there’s merit to each of the subplots that the film has but none of them are given the full attention that they deserve. Also, though, it never really feels like anything new is being explored for the series. Each of the previous Toy Story films embraced a different aspect of humanity and aging while this one simply feels like an adventure.

If all that viewers are looking for is an adventure with some of their fan favorite characters, then this sequel does its job. Yet, it feels out of touch and sorely lacking the magic of the other three films. The other films all had very emotionally heavy morals and realities about becoming an adult. This new film doesn’t really have that. It tries. It really does try with its ending but it only partially succeeds. The Toy Story franchise has lofty expectations when it comes to its new installments and each film in the original trilogy has earned its stripes. You could make an argument for any one of them as the best entry. The same can’t be said for Toy Story 4. It doesn’t even come close to the emotional heights of the series and that is its biggest downfall.

Of course, this is a Pixar film so it’s still perfectly watchable and a relatively enjoyable experience nonetheless. The animation in this film is spectacular. The visuals are almost photorealistic at times. The opening scene of a thunderstorm is astounding and locations like the antique store almost feel real. Pixar essentially created the computer generated animation game and they continue to prove that they’re the best here. Again, the inanimate objects are so lifelike that they could almost pass for the real thing. Even if Toy Story 4 is lacking in its story and emotion, the film is still a technical work of art. 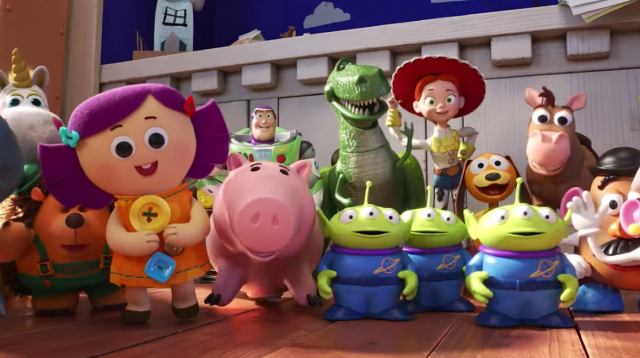 Then, you have the characters. This may be a point of contention among fans as there are pros and cons in this department. Firstly, it’s always great to see this particular gang of toys back together. Though, the herd has been thinned out over the years. Woody, Buzz, Jessie (Joan Cusack), Bullseye, Rex (Wallace Shawn), Hamm (John Ratzenberger), Slinky Dog (Blake Clark), and the Potato Heads all return here. However, due to Don Rickles’ passing back in 2017, he only has a few lines inserted from archival recordings. Estelle Harris’s Mrs. Potato Head may not even have a single line in the film so it’s strange to even see her name in the film’s credits. Buzz and Jessie, who’ve been series favorites, really take a backseat in this film. This is especially true for Buzz who has a handful of moments to shine but they’re few and far between. Even Bonnie’s toys, like Dolly (Bonnie Hunt), Trixie (Kristen Schaal), and Mr. Pricklepants (Timothy Dalton) don’t get increased screentime to make more of a presence.

Instead, Toy Story 4 introduces several new characters who do give the film a life of its own. During Woody and Forky’s travels, they meet two carnival plushes, Ducky (Keegan-Michael Key) and Bunny (Jordan Peele), who bring their brand of comedy to the roles. Then, there are Bo Peep’s friends, Giggle McDimples (Ally Maki) and Duke Caboom (Keanu Reeves) who play some relatively big roles throughout. Duke Caboom specifically is responsible for some of the film’s funnier moments as a Canadian stuntman toy. Though, the biggest missed opportunity was with Carl Weathers voicing a trio of Combat Carl dolls in probably the funniest scene of the entire film. Frankly, if there’s a Toy Story 5, we need more Combat Carl. Overall, the film does pretty well with its cast of new characters but it does so at the expense of the old ones. In this regard, Toy Story 4 feels bittersweet. Sure, you could argue that it was time to move on but, when you have such beloved characters, it’s also irresponsible to mostly disregard them too.

As previously mentioned, Toy Story 4 isn’t bad. It just doesn’t feel like a real Toy Story movie. It’s as if someone else came along and decided to make their own idea of Toy Story instead of staying faithful to the original vision. When looking at the number of writers on this film, it’s not hard to see why things may have gotten jumbled around. There are eight(!) story credits on this film which is insane. It’s actually surprising that the film turned out as good as it did with that many hands in the cookie jar.

With such a perfect close to a trilogy in Toy Story 3, it’s difficult to comprehend why this story was chosen for a fourth entry. There are interesting things happening throughout but the focus shifts and doesn’t spotlight the true heart of this story. The Forky character is admittedly lame, although the idea has its moments of intrigue, and the story spends too much time on him. The plot should’ve focused on Woody and his demotion to not being played with. That would’ve been a much more interesting existential crisis with a character fans love and care about. Woody’s spiritual journey throughout Toy Story 4 is of loss and sadness which is something that Toy Story has tackled in the past but never as heavily as they could’ve done here. If you’re just looking for some no-strings-attached Toy Story fun, then you’ll have a good time with this sequel. However, if you’re expecting anything as touching and emotional as the end of Toy Story 3, it’s not likely that you’ll find it with Toy Story 4.