As everyone knows by now, Disney likes to make money. They like to make a lot of money. They’re not even done making money with Avengers: Infinity War and they want to start making more already. Having gigantic franchises like the Marvel Cinematic Universe and Star Wars definitely help in that regard. It has only been five months since Star Wars: The Last Jedi hit theaters but Disney’s thirst for cash has resulted in the second Star Wars Anthology spin-off of the main saga. In 2016, we got the very solid Rogue One. This time around, we have the perfectly serviceable Solo: A Star Wars Story.

The initial announcement of Solo felt uninspired. The first teaser for the film dropped in February and didn’t instill much excitement either. As it turns out, the film had much adversity to overcome throughout its production. Not only did Solo have to introduce a new actor in the role of the title character, the film also underwent a complete shift in direction. The duo of Phil Lord and Christopher Miller originally manned the director’s chairs for the film. Though, after creative differences with producers Kathleen Kennedy and Lawrence Kasdan, the two parted ways with the project. This led to Ron Howard, who’s also a friend of Star Wars creator George Lucas, taking the job and reshooting 70% of the film.

Solo: A Star Wars Story centers around the smuggler, and overall good-hearted scoundrel, Han Solo (Alden Ehrenreich). On the planet Corellia, Solo and his girlfriend, Qi’ra (Emilia Clarke), bribe an Imperial officer to allow them to escape the clutches of the local gang. Unfortunately, Qi’ra is captured at the last possible second while Solo escapes. Three years later, he joins the Imperial navy as a pilot but comes across a group of smugglers and thieves who he attempts to join. Instead, the head of the group, Tobias Beckett (Woody Harrelson), outs Solo as a traitor and he’s dumped into a pit with the “beast,” Chewbacca (Joonas Suotamo). The two team up to escape their prison and are accepted by Beckett who shows them the ropes as smugglers.

The first thing you may notice is the absence of plot. Whether this is due to the change creatively with the director switch or if the screenwriters just didn’t know what they wanted the film to be about, there is definitely an absence and an odd surplus of storylines. It also doesn’t help that, as Star Wars fans, we all know what ultimately happens with the Han Solo character. The film meanders through attempts at characterizing Ehrenreich’s Solo and also giving him a Star Wars-esque adventure. Of course, Emilia Clarke’s Qi’ra is thrown in as an obligatory love interest which also doesn’t make much sense. She’s not a character in the saga and we all know that Han ends up with Princess Leia. For much of the film’s runtime, there are just action packed events happening with a stock romantic story thrown in for good measure. 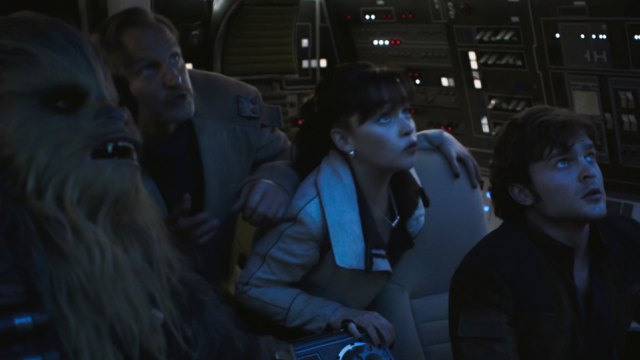 Now, this isn’t to say that any of the characters in the film are bad. Since her star-making performance as Daenerys Targaryen in HBO’s Game of Thrones, Clarke has proven herself a more than capable actress and that shows again in Solo: A Star Wars Story. Had a lesser actress been cast as Qi’ra, there’s no way that the character would’ve made any type of impact. Woody Harrelson is his typical self as Tobias Beckett. Harrelson has certainly stood the test of time in Hollywood and it’s strange to see him in a Star Wars film but he does a solid job as always.The true standout of the entire film is Donald Glover as Lando Calrissian. His performance does actually give a little more insight to the character and establishes his relationship with Han Solo quite well.

Of course, many fans are skeptical of someone filling Harrison Ford’s shoes as Han Solo. Alden Ehrenreich does the best possible job that anyone could in stepping into such an iconic role. That being said, he doesn’t really add anything new or emotional deep about the character either. In addition, he frequently says that he’s not a good guy and that he’s a scoundrel while never really proving that. Just because he’s a smuggler and a thief doesn’t make him inherently bad. Not to mention, he’s stealing from the real bad guys and trying to help the less fortunate. He’s like the Robin Hood of a galaxy far, far away. Regardless, Ehrenreich plays a rock solid Han Solo but isn’t able to make the role his own.

In our review of Deadpool 2 last week, we mentioned how expectations were through the roof and that it seemed most reviewers were giving it begrudgingly positive ratings. Similarly, Solo: A Star Wars Story has gotten similar treatment. Though, expectations for this film were quite low instead. What’s kind of bewildering about the film is that it starts off very shaky. Going into the film, you don’t want to see a new Han Solo. It’s also hard to care about his early exploits as there’s no way they’ll live up to the events of the Star Wars saga. However, it’s a welcome surprise that you actually start to enjoy yourself as the film goes on. No, the events don’t really have a whole lot to do with any of the events from the original 1977 film. Yet, around the halfway point, Solo: A Star Wars Story is kind of fun to watch.

This film is kind of a hard one to assess. When all’s said and done, it’s a big piece of fluff. However, it can be a fun piece of fluff at times. There are moments like doing the Kessel Run in twelve parsecs that are fun pieces of Han Solo lore that we get to see come to life. There are also a ton of questions left unanswered by the end of the film. Does that mean sequels, more spin-offs, or what? On this site, we’ve questioned the idea of the Star Wars Anthology films and Solo: A Star Wars Story does nothing to justify them. If Disney is going to insist on making them, they could do a whole lot worse than this film though. Again, Solo isn’t going to broaden the appeal of its title character or give him any emotional depth but it’s a perfectly watchable film in the Star Wars canon.