In most cases on this site, there’s often a line drawn between good films and bad films. All art in general is subjective and people simply like what they like. When it comes to horror, there tends to be more leeway for what represents a “good” film. Some are legitimately high quality (i.e. The Exorcist) while others fall into the “so bad they’re good” territory (i.e. Troll 2). In the case of something like Rolfe Kanefsky’s Art of the Dead, it falls more into the latter category. Though, it’s not necessarily that bad either. It’s not something you’d identify as artful filmmaking but between its fun story and gruesome special effects, it’s a ridiculously entertaining horror experience.

The film opens with art collector Douglas Winter (Richard Grieco) acquiring the final piece of painter Dorian Wilde’s (Danny Tesla) Sinsation Collection. The seven paintings, which represent the seven deadly sins, house an evil force that soon rips through the Winter family. Following this, the paintings are auctioned off by Tess Barryman (Tara Reid) with Dylan (Lukas Hassel) and Gina Wilson (Jessica Morris) as the eventual buyers. The Wilsons bring the paintings home and find spots for each of them. With Dylan’s son, Louis (Zachary Chyz), and his girlfriend, Kim (Alex Rinehart), visiting, the paintings have an entire family to corrupt and torment while Louis finds a muse for his own art in Dorian Wilde’s work.

While it’s not the first or only film to focus on the seven deadly sins, the film based on this subject that comes to mind for most viewers will be David Fincher’s Seven. Needless to say, Art of the Dead is not Seven. However, it does carve out its own unique version of the sins. Each painting is of a different animal which viewers will come to recognize as the sins. The characters become enamored with their respective paintings and obsess over their content. Where Seven had one killer committing his crimes based on the sins, Art of the Dead gives the audience some brutal deaths and gross out effects unique to each character as its thrills. 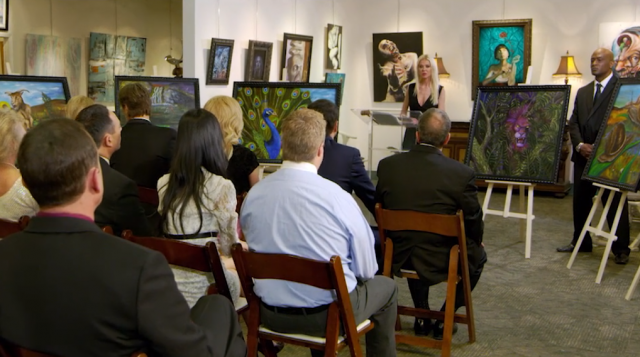 Speaking of the effects, they’re definitely the highlight of the film. From the introductory scenes with the Winter family, horror fans are in for a treat with a multitude of practical effects. From blood and guts, grotesque costuming, animatronics, and everything in between, Art of the Dead feels like a throwback to 1980’s horror artists like Tom Savini. Vincent J. Guastini, who has worked on films from Super Mario Bros. all the way to Requiem for a Dream, is responsible for the special effects and creatures. Ultimately, his work is what makes this film. Without its creatures, blood, and gore, Art of the Dead would be your standard throwaway B-movie. Instead, it’s more along the lines of B-movie classics like It’s Alive! or Braindead.

Now, before we get too carried away, this isn’t a perfect film by any means. There are definitely some things that don’t make a ton of sense. For example, the tragic end of the Winter family is very different than how the story of the Wilsons is handled. The Winters die in much more brutal ways where a fantastical and surreal approach is taken with the Wilsons. If the paintings/sins are responsible, then why should the differ so much? There are also some throwaway deaths that feel shoehorned in. The most obvious one is Gluttony which basically has no effect on the film whatsoever. Though, it’s a pretty excellent scene regardless despite being one that doesn’t impact the story. Without spoiling anything, there’s also a moment towards the end of the film where a character shakes their influence of the paintings to play hero without any explanation. When you have a film with so many characters and ideas, these kinds of things can often happen. 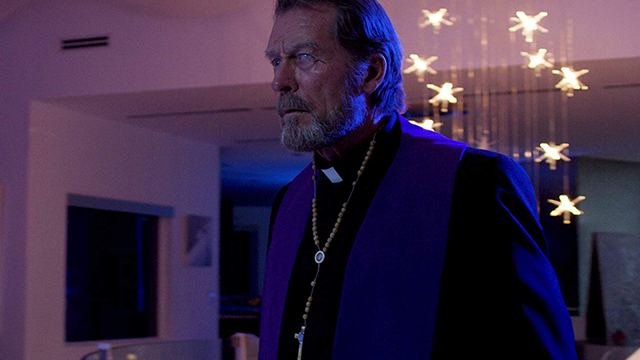 The characters are also a mixed bag throughout the film. For the most part, everyone does a solid job. Lukas Hassel, who had a memorable role as the Ogre in Jeremiah Kipp’s short film, Slapface, is very amusing in his transformation to Greed while Cynthia Aileen Strahan’s Donna turns into a nutcase during her descent into Envy. Both provide some of the film’s highlights. Alex Rinehart plays the likable protagonist, Kim, and does a good job of moving the story along from sin to sin. However, Jessica Morris is the star as the lustful Gina. As she becomes the central character, you find yourself anticipating her every move. Both Richard Grieco and Tara Reid are fine in the film but their roles are relatively minor and are mostly left out of the main story. The acting from Zachary Chyz, Danny Tesla, and Robert Donavan as Father Gregory Mendale can be a bit hokey at times but this probably isn’t because of the actors themselves. The script gets a bit wordy at inopportune times and these three seem to suffer the most from it. This is especially the case with Donavan who plays an important and likable character. Yet, he’s also a big source of exposition for the film which limits his performance a tad.

Art of the Dead is at its best when it’s just having fun. Luckily, that’s mostly what it does. With a subject like the seven deadly sins, it could get preachy but it stays away from all of that. Instead, it’s packed with blood, guts, sex, and death just as is expected from the horror genre. If you’re not a fan of horror or B-movies in general, Art of the Dead isn’t going to convert you. However, if you’re in the mood for gore, creature effects, and just plain entertainment value, give this one a shot.

*Art of the Dead is currently available on DVD here or for rent or purchase on video-on-demand sites like Amazon. Check out the trailer below.*

One Thought to “Indie Film Review: Art of the Dead”