For many, the beauty of independent cinema lies in a filmmaker’s attempts to present his/her own unique vision onscreen. This can also lead to miserable final results since indie filmmakers often have free rein to do whatever they want with their work. In the case of today’s film, writer/director Joe Badon finds a reasonable balance between telling a unique and interesting story while also being able to sprinkle in plenty of weirdness to satisfy fans of the surreal. Yes, Badon’s newest feature, Sister Tempest, is quite the wild ride at times but it usually doesn’t get too distracted by its more perplexing moments while telling its story either.

The film follows Anne Hutchinson (Kali Russell), an art teacher whose younger sister, Karen (Holly Bonney), goes missing after a flare up between the two. Under a strange alien tribunal, Anne relays her recollection of events despite her mental state being somewhat unreliable. In addition, Anne takes in one of her young students, Ginger (Linnea Gregg), who has nowhere else to go. However, a mysterious recurring illness causes Ginger to go into a cannibalistic frenzy.

As is the case with many surreal arthouse films, especially those that dabble in the horror genre, there’s a lot of weird stuff going on in Sister Tempest. Simply put, it’s not a film for just anybody. Though, it’s not impossible to follow for a more casual viewer either. There are moments and plot devices such as Ginger’s cannibalism or the alien tribunal that can be confounding at times but none of these things ever take viewers out of the overall story. Thankfully, Badon always comes back to the story being about the deterioration of Anne’s relationship with her sister as well as her mind. 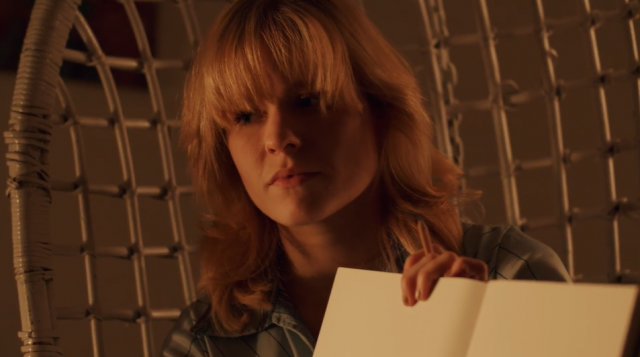 The one word that constantly comes to mind in relation to Sister Tempest is “intrigue.” Every second of the film’s two hour runtime feels like a spectacle and it’s easy to get lost in it. The ongoing mystery behind what happened to Anne’s sister, Karen, is never forgotten and the budding relationship between Anne and Ginger is sometimes heartwarming but also sometimes terrifying. Then there are the times when the surrealism rears its head and really forces the viewer to think about what’s going on.  This isn’t necessarily a bad thing as filmmakers like David Lynch have carved out entire careers on suckering an audience in before slapping them upside the head with intentional strangeness. Joe Badon doesn’t go quite that far with Sister Tempest but Lynch’s work, especially on something like Mulholland Dr., seems to be an influence here. There’s a sort of dreamlike quality to Sister Tempest and the dynamic between lead characters Anne and Ginger feels reminiscent to that of Naomi Watts’ Betty and Laura Harring’s Rita in Lynch’s film. There’s also a strong Terry Gilliam 12 Monkeys vibe along with a splash of something like Dario Argento’s Suspiria with the color palette and the film’s more gory horror moments.

What really holds the film together through all of its horror, comedy, drama, and surrealism are the performances. Again, similar to something like Naomi Watts and Laura Harring’s performances in Mulholland Dr., Kali Russell and Linnea Gregg are tasked with wearing many acting hats throughout this film. Both women do a great job traversing their way through Badon’s wild script and keeping viewers glued to their actions. Russell plays Anne as not only a sister but also a motherly figure to first Karen and, later, Ginger. In addition, she’s the focus of the alien tribunal scenes as well as having to play the role of a woman who may be losing her mind. The script expects a lot out of Russell and she proves to be a solid leading lady for this film. Though, it’s Linnea Gregg as Ginger who stands out most here. Frankly, Ginger is just weird but in the best way possible. Her innocent, starry eyed façade and sometimes erratic actions mixed with her insatiable hunger make every moment that Gregg’s onscreen compelling. You’re always wanting to see what she’s going to do next. 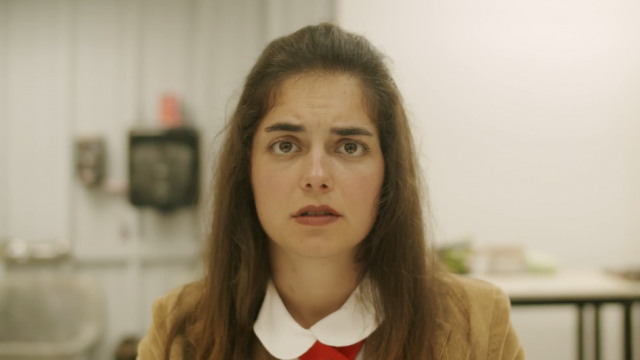 Despite the film having so much intrigue behind it, there’s still one main problem with Sister Tempest. In most instances, it seems like it’s weird for weird’s sake. Now, this is definitely a stylistic/genre choice by Joe Badon and he should be applauded for realizing his vision onscreen. Yet, this is one of those cases where some viewers may find themselves asking if certain scenes or ideas are necessary. The story itself is compelling enough to leave out some of the more bizarre plot devices. Other titles like Jacob’s Ladder, The Machinist, and Shutter Island have dabbled with similar ideas in the past and have left out many of the peculiarities that Sister Tempest seems to employ. Sometimes the plot gets lost among the more strange and unusual moments which will have some kind of forgetting what the film is about. Then again, without some of this extraneous execution on behalf of Badon, Sister Tempest may look like a completely different film.

That being said, Sister Tempest is still the film that Badon wanted to make and, overall, it mostly hits a sweet spot between being intriguing and just being weird. From start to finish, viewers should be sucked into the surreal tale while also appreciating the fine character work and even the more outlandish scenes for the experience alone. As previously mentioned, Sister Tempest isn’t going to be a film for everybody nor was it likely intended to be. However, there’s no reason that fans of surreal, arthouse, and/or horror cinema shouldn’t be able to find something to appreciate about Sister Tempest.