In the past few months, we’ve talked about forbidden love here on this site in a number of reviews. May el-Toukhy’s Queen of Hearts and Jay Holben’s Before the Dawn both feature these types of off limits romances between an older woman and a younger man. A lot of times, forbidden love is romanticized and almost encouraged in cinema due to likable characters, undeniable chemistry, and an understanding of human nature and carnal desires. However, this doesn’t change the fact that this behavior is taboo and often illegal if it comes to someone who’s underage. It’s also not always the case that sexual acts are consensual. The new short film from David Legel and Andy Aguila, Roses for Ms. Jacobs, focuses on a realistic scenario instead of the fairy tale romance that so many films choose to go with instead.

The film opens at a small outdoor funeral for Marie Jacobs (Denise Pazienti). Her son, Michael (Andrew John Morrison), gives a half-hearted tribute to his mother while fellow classmate, Barry (James Lewis), looks on uncomfortably. It then flashes back to before Ms. Jacobs’ death where Barry has just graduated from high school but receives no approval from his absent parents. For this, he turns to his teacher and friend, Ms. Jacobs. The two develop a friendship that Michael finds to be somewhat uncomfortable. In time, Barry discovers that maybe an innocent platonic relationship isn’t exactly what Ms. Jacobs had in mind.

While there’s usually some discomfort in these types of stories given the age gaps between characters, most films of this ilk get you to root for the unlikely couple by the conclusion. That’s clearly not the intention with Roses for Ms. Jacobs. The film focuses heavily on miscommunication between the characters to tell the story. Barry isn’t looking for a romantic partner. He doesn’t receive any recognition from his parents for his achievement so, instead, he turns to a maternal figure in his teacher, Ms. Jacobs. Aging and somewhat estranged from her son, Ms. Jacobs is looking to fill a void in her life as well. Though, it could be left up to the audience to interpret what kind of a person she truly is behind closed doors. Michael and his mother have a tenuous relationship that we don’t necessarily know the cause of. Then, there’s the interactions between Barry and Michael with the latter coming across almost as a villain at times. 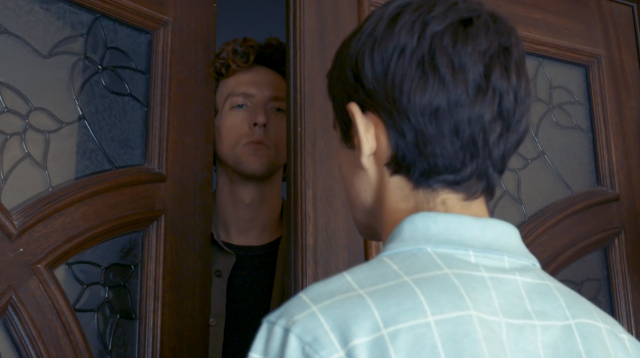 As you may be able to tell, there are a lot of moving parts in a film that basically centers on only three people. Luckily, the small cast pulls off each of their roles very well. James Lewis as Barry is a quiet and shy teen that seeks seeks acceptance from seemingly the only person who has ever stood behind him. It’s likely that he knows his relationship with Ms. Jacobs is out of the ordinary but, from his perspective, it’s nurturing and innocent. He needs a parental figure and she needs a son. As for Denise Pazienti’s Marie Jacobs, her poor self image is boosted by her friendship with a younger man. It’s possible she misinterprets his intentions but maybe not given her relationship with Michael. While Lewis and Pazienti are largely the focus of Roses for Ms. Jacobs, Andrew John Morrison may be the film’s low-key star. There’s complexity to his character as he appears to know things about his mother that the audience doesn’t. Has something happened between Michael and his mother in the past to warrant the hostility? Morrison’s brooding and reactions to Barry indicate that it’s not out of the question.

Even more credit needs to go to writer/directors David Legel and Andy Aguila. The story is, of course, extremely relevant as these types of stories seem to pop in the news quite frequently in this day and age. The duo opt to take a more sobering approach to the subject matter and the damage it causes to those involved. Their mission statement for the film deals with the idea of closure between victim and assailant. It also explores how people are able to move on in the wake of certain events and finding strength in knowing that they’re not alone. Legel and Aguila had a clear vision for what they wanted Roses for Ms. Jacobs to be and their message is admirable. The film also doesn’t slouch technically with some beautiful cinematography from Jack Stoll and effective editing also from Legel. 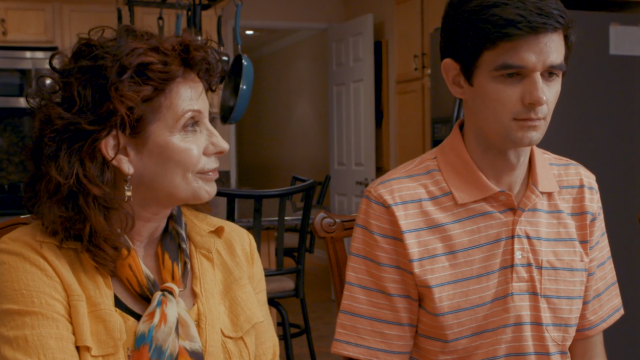 There’s not much to complain about with such a significant topic, great performances, and a clear filmmaker statement present in Roses for Ms. Jacobs. However, we wouldn’t be doing our job without some nitpicks. One of the hardest things to overlook in the film was the age of both Barry and Michael. Barry has just graduated high school and Michael has to be around the same age. It’s kind of difficult to accept both James Lewis and Andrew John Morrison as high school aged teens. As previously discussed, their performances, thankfully, do allow viewers to suspend disbelief and these discrepancies don’t lessen the overall message of the film. Yet, it may take viewers out of the story for a moment. Also, during the climactic scene with Ms. Jacobs and Barry, the film feels a tad bit like a public service announcement. While it’s true that the film was made to bring awareness to this topic, it feels slightly less dramatic than it should be with the dialogue in the scene.

That being said, David Legel and Andy Aguila still accomplish everything they set out to do with Roses for Ms. Jacobs. They also add complexity as to not make this a one sided tale. Yes, much of the focus is on the victim, Barry, but there’s a lot of harm done to the other characters as well. All three lead characters experience pain and loss in some way. None of them escape from this one event unscathed no matter the role they played in it. The filmmakers don’t promote hatred or vengeance as a means for dealing with an issue. They take the moral high ground with acceptance and compassion as major themes. They succeed in doing this all while making a stunningly beautiful film to look at as well. With Roses for Ms. Jacobs, Legel and Aguila craft a tender, yet distressing, tale that will remind those in pain that they are never alone.

One Thought to “Short Film Review: Roses for Ms. Jacobs”